If there’s a bright side to the recent earthquake in Japan, it’s the fact that it was a truly monster event. The damage has been appalling, but it’s not something we should expect to see very frequently. In fact, there were only 11 of this class of “megathrust” earthquakes during the entire 20th century.

However, there have been five megathrust earthquakes in just the past five years, and Yale geophysicist Jeffrey Park says this kind of clustering is far 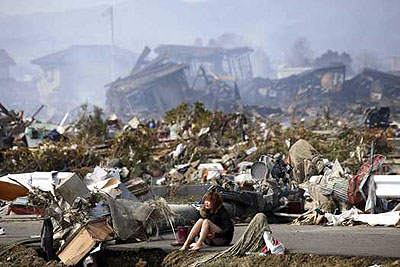 from unprecedented. So we might be in store for a few more. And for Japan in particular, the news is even worse:

[Several years ago] Ross Stein and his USGS colleagues discovered that the stress increments of past large earthquakes were good predictors of where the next large earthquake would occur. Long after the aftershocks subsided — months, years, or decades after — another earthquake of similar size often broke within the next segment of the fault zone.

….An irregular series of large, damaging earthquakes shook the North Anatolian Fault in the twentieth century from east toward the west across modern-day Turkey, reaching the Sea of Marmara in 1999 with the Izmit earthquake….More germane to Japan, the 9.3 Sumatra-Andaman megathrust earthquake in December 2004 loaded the next subduction-zone segment to the south, and this segment generated an 8.6 megathrust event only three months later in March 2005.

No prediction can be made today for Japan, but it is safe to project a sharply increased probability for a major earthquake on the broad, simple subduction-zone segments both north and south of the Tohoku rupture zone. The segment to the south lies offshore the Tokyo metropolitan area.

I don’t really have anything to say about this. It’s just plain bad news. More at the link.