In the New York Times this weekend, David Greenberg takes on the dreaded Last Chapter problem, which curses nearly every book that analyzes a social or political problem:

Practically every example of that genre, no matter how shrewd or rich its survey of the question at hand, finishes with an obligatory prescription that is utopian, banal, unhelpful or out of tune with the rest of the book. When it comes to 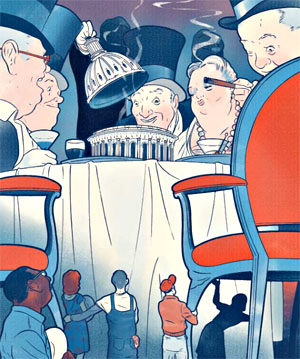 social criticism, no one, it seems, has an exit strategy.

Greenberg’s analysis of why last chapters nearly alway disappoint is the obvious one: any social or political problem that’s hard enough to be interesting is also hard enough to have no obvious solutions. In fact, most of them are hard enough not to have any short-term solutions at all, obvious or not.

So how do things work out if you abandon the last chapter and don’t offer up any solutions to the problem you described? Judge for yourself. When my editors initially asked me to write my recent article about the decline of unions and how that affected the liberal project, I told them I was reluctant because I didn’t have any solutions to offer up. No problem, they said. So I went ahead. Here’s the original ending:

And yet: The heart and soul of liberalism is economic egalitarianism. Without it, Wall Street will continue to extract ever vaster sums from the American economy, the middle class will continue to stagnate, and the left will continue to lack the powerful political and cultural energy necessary for a sustained period of liberal reform. For this to change, America needs a countervailing power as big, crude, and uncompromising as organized labor used to be.

Now that, I figured, made it crystal clear that I wasn’t offering up any solutions. I liked it. But it was just a wee bit too blunt, so eventually I agreed to add one more paragraph:

Over the past 40 years, the American left has built an enormous institutional infrastructure dedicated to mobilizing money, votes, and public opinion on social issues, and this has paid off with huge strides in civil rights, feminism, gay rights, environmental policy, and more. But the past two years have demonstrated that that isn’t enough. If the left ever wants to regain the vigor that powered earlier eras of liberal reform, it needs to rebuild the infrastructure of economic populism that we’ve ignored for too long. Figuring out how to do that is the central task of the new decade.

This doesn’t offer up any solutions either, but it’s slightly less bleak. At least it lays out an action program for the next decade: figure out how to replace the working class institutional muscle that unions used to offer the progressive movement.

So here’s the question: what do you think? Those of you who read the piece: did it strike you as disappointing that after wading through 4,000 words you didn’t really get any words of hope and encouragement? Even if it had been a little weak, do you think the whole thing would have gone down better if I’d tacked on a few paragraphs of possible solutions? Or was it better left this way?