We are obsessed with education in America. We are obsessed, in particular, with the notion that our schools are failing and have to be fixed. We need to test kids. We need to identify and fire bad teachers. We need merit pay. We need charter schools. We are all waiting for Superman. Philanthropists and the federal government spend billions of dollars per year on programs to promote better schools.

James Heckman doesn’t quite say that this is all a waste of money. But he comes close. In a new essay summarizing his recent work on skill formation in children, he says the chart below tells you most of what you need to know about educating our kids: 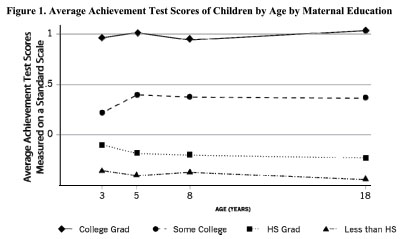 [These] gaps arise early and persist. Schools do little to budge these gaps even though the quality of schooling attended varies greatly across social classes. Much evidence tells the same story as Figure 1. Gaps in test scores classified by social and economic status of the family emerge at early ages, before schooling starts, and they persist. Similar gaps emerge and persist in indices of soft skills classified by social and economic status. Again, schooling does little to widen or narrow these gaps.

Heckman argues that these achievement gaps—between black and white, between rich and poor—are today less the result of overt discrimination than they are of skill gaps that open up very early in life and persist in the face of a wide variety of both good and bad schools. What’s more, these gaps aren’t purely, or even mainly, the result of differences in cognitive ability. At least equally important are soft skills: “motivation, sociability (the ability to work with and cooperate with others), attention, self regulation, self esteem, the ability to defer gratification and the like.”

In the face of this evidence, Heckman recommends that we abandon a scattershot approach toward education and instead focus far more of our resources on intensive, early interventions:

A strategy that places greater emphasis on parenting resources directed to the early years is a strategy that prevents rather than remediates problems. It supplements families and makes them active participants in the process of child development.

Remediation strategies as currently implemented are much less effective. This is the flip side of the argument for early intervention. Many skills that are malleable in the early years are much less so in the teenage years. As a consequence, remediating academic and social deficits in the teenage years is much more costly….For high quality early childhood interventions, there are none of the trade-offs between equity and efficiency that plague most public policies. Early interventions produce broadly based benefits and reduce social and economic inequality. At the same time they promote productivity and economic efficiency. They are both fair and efficient.

The whole paper is worth reading, and it informs some of my thinking about the education wars. Heckman isn’t calling for an end to efforts to improve education, and neither am I. But both of us are skeptical about the flavor-of-the-month “reforms” that pop up periodically, are endorsed unanimously by the great and good, and then disappear within a few years to be replaced by some new silver bullet—and always without producing any scalable, practical, long-lasting results.

Intensive, early interventions, by contrast, genuinely seem to work. They aren’t cheap, and they aren’t easy. And they don’t necessarily boost IQ scores or get kids into Harvard. But they produce children who learn better, develop critical life skills, have fewer problems in childhood and adolescence, commit fewer crimes, earn more money, and just generally live happier, stabler, more productive lives. If we spent $50 billion less on K-12 education—in both public and private money—and instead spent $50 billion more on early intervention programs, we’d almost certainly get a way bigger bang for the buck.

Maybe somebody ought to make a documentary about that.