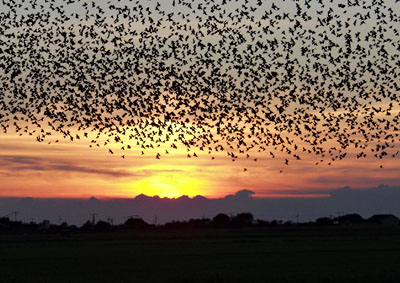 OK, so how big is our bird predation problem? Did I get an answer to my question from last night?

Probably. But first a few related items that multiple people pointed out in comments. First, habitat destruction is a way bigger problem than cats, so if you want to worry about the fate of North American birds, that’s #1 on your list. Second, overall numbers are only part of the story. Even if cats aren’t responsible for wholesale decimation of the bird population, they might still be responsible for serious damage to specific species in specific places. Third, although it’s true that it’s natural for cats to kill birds, the cat population in the United States is artificially high thanks to all of us cat lovers who keep them as pets. So the total amount of feline bird hunting is higher than it would be in a state of nature. There’s more in the comment thread if you’re interested.

Still: how many damn birds are there in the United States? John Trapp rounds up the literature here and figures the best guess is around 10 billion birds in spring and 20 billion in the fall. Meanwhile, the aptly named book, “How Many Birds Are There?” estimates 200-400 billion birds for the entire world, which is pretty consistent with 10-20 billion in the U.S.

So, assuming once again that cats really do kill 500 million birds a year, as the American Bird Conservancy claims, it means they kill something like 3% of the total bird population of the country. The error bars are probably fairly large on this number, but at least it provides the right ballpark. So now you know.