The Project for Excellence in Journalism reports that the audience for cable news plummeted last year. In particular: 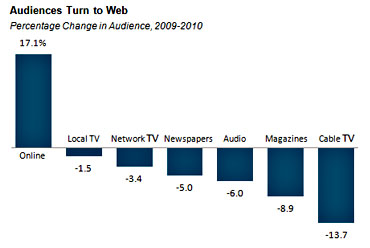 more, 16% to an average of 3.2 million, according to PEJ’s analysis of Nielsen Market Research data. Daytime fell 12%.

This is interesting. The audience for actual cable news dropped a fair amount, but the audience for prime time blowhardery dropped even more. So the problem isn’t that 24/7 news is too boring and needs further injections of attitude, because it turns out that attitude isn’t selling as well as it used to. On the other hand, CNN cratered in prime time far worse than the two blowhard cable news outlets, so apparently the public appetite for more high-minded analysis is weak too.

I don’t really know what to make of this, but in a weird way I blame MSNBC. For a while, Fox was sui generis, and their viewers basked in the idea that they were part of an exclusive fraternity of insurgents fighting the liberal media monolith. Then MSNBC became the Fox of the left, and suddenly the liberal monolith was unmasked as…..Rachel Maddow and Keith Olbermann. Once prime time explicitly became just a battle of Team Right versus Team Left and Team Nothing, that made all the blowhardery just a little less special than it used to be in the good old days. Even diehard partisans probably started to lose interest, and that dampened the appetite for prime time cable shows of all stripes.

Then again, maybe it’s all Glenn Beck’s fault. When a guy like that becomes the face of cable opinionmongers, it can hardly help but give opinonmongering a bad name.