John Maynard Keynes is famous for saying “The market can stay irrational longer than you can remain solvent.” He’s also famous for quipping at a dinner party to someone who criticized him for contradicting himself, “When the facts change, I change my mind. What do you do, sir?” Jason Zweig follows up:

There’s just one problem with both these quotations: No one can point to a primary source proving that Keynes ever uttered them.

In an e-mail in 2003, Keynes’ most authoritative biographer, Lord Robert Skidelsky, told investment advisor William Bernstein that he believed they were “both apocryphal.” This week I asked another renowned expert on Keynes, Donald Moggridge of the University of Toronto, if he could identify the source of either 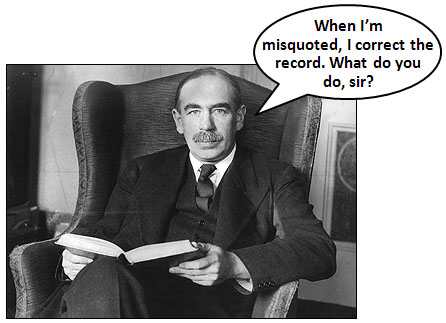 of the oft-quoted remarks. “The simple answer,” Prof. Moggridge replied by e-mail, “is there is no evidence.”

These two quotes, which really need to exist even if Keynes didn’t utter them, join loads of others that apparently never got said either. Like this one and this one, for example. Zweig has offered ten dollars each to anyone who can find a primary reference for the Keynes quotes, but I’m willing to concede right now that he’ll probably be able to hang on to his sawbucks. I’m more interested in something else: who made up the quotes? As a social phenomenon, that’s really more intriguing. Someone, somewhere, invented these quotes, and they sounded so much like Keynes that they’ve been almost universally accepted ever since. Who knows? Maybe they were accepted even by Keynes himself. One of the linked quotes above is from Everett Dirksen, who was alive while he was being misquoted all over the place but just never bothered to correct the record. So this could go back a long way.

Anyway, fine: Keynes didn’t say this. So who made up the story?