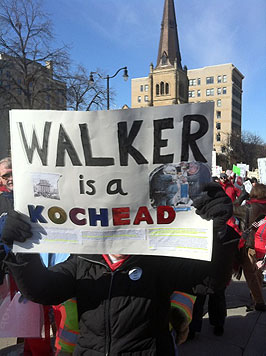 So how big is Wisconsin’s budget problem? And did Gov. Scott Walker help create it? Politifact takes a look at the numbers here and tells us.

Nickel version: the projections from the legislative analyst are necessarily subject to a bit of guesswork, but he estimates that Wisconsin will probably have a modest shortfall in the current fiscal year, amounting to about 1% of the total budget. In the two-year cycle after that, the legislative analyst estimates that tax collections will run $190 million below previous estimates. Nearly two-thirds of this revenue deterioration is due to legislation supported and signed by Walker during a special session he called last month.

Bottom line: Wisconsin’s budget problems are fairly modest this year, but substantially larger in the two years after that despite the fact that tax revenues are projected to increase about 4% in both 2012 and 2013. However, whatever the size of the future deficit (which is still a point of dispute), revenues for 2012 are about 1% less than previously estimated thanks to Walker’s special session bills. Walker isn’t at fault for the current year’s shortfall, but he is at fault for making the shortfall worse over the next two-year cycle.

Wisconsin’s public sector workers have already taken a 3% cut in wages over the past two years. Maybe that’s enough, maybe it isn’t. But Walker has taken an already pressing problem, made it incrementally worse, and then used it not just as an excuse to bargain hard on wages and benefits, but as an excuse to gut Wisconsin’s public unions entirely. (The Democratic-leaning ones, anyway.) It’s just not a good faith exercise.

For more, check out Andy Kroll’s explainer here, and be sure to scroll down for the updates. Andy’s on the ground in Madison right now and you can follow his Twitter feed here.

UPDATE: The original draft of this post underestimated the size of Wisconsin’s future deficits. I’ve corrected the text to more accurately reflect the legislative analyst’s estimates. The most recent estimates from the state budget director are here.