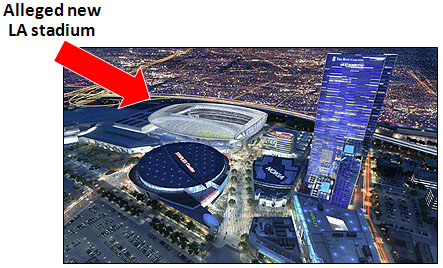 In its never-ending quest for a pro football team, one of the groups with plans to build a new stadium in Los Angeles is teeing up an announcement:

Backers of a plan to build a football stadium in downtown Los Angeles are set to announce Tuesday that they have reached a naming-rights deal worth $700 million, which would be the most valuable such agreement ever and a significant step toward bringing an NFL team to Los Angeles.

….The deal [with Farmers Insurance] would provide AEG’s proposed project a crucial chunk of contractually obligated income, starting at $20 million for the first year and escalating incrementally every year after, according to individuals familiar with the negotiations but not involved in them. The stadium would be named Farmers Field.

I’m wildly ignorant about this stuff, and obviously naming rights have been big business for sports venues for a long time now. But I’m still a little perplexed by it. Is this stuff really worth it? Does Farmers Insurance truly get $20 million per year of promotional value just for having its name on a stadium? Or is this largely a charity operation, with a local company demonstrating its support for the community? Or what? Can anyone point me to the definitive piece to read on naming deals?