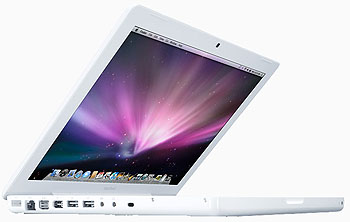 Andy Crouch defends the cult of Apple by calling it “a religion of hope in a hopeless world, hope that your ordinary and mortal life can be elegant and meaningful, even if it will soon be dated, dusty, and discarded like a 2001 iPod.” Andrew Sullivan concurs:

This is certainly why my own conversion to Apple, and my deep loyalty to the company and its products, somehow felt comforting in the last decade. Their style elevates me, their power and reliability I have come to take for granted. Their stores have the innovation and beauty that a renewed Christianity would muster in its churches, if it hadn’t collapsed in a welter of dogma and politics.

Seriously, guys? Come on. I’ve used Macs. I’ve been in Apple stores. Not in Manhattan, granted, but then, most Apple stores aren’t in Manhattan. The last time I was in one, it consisted of a whole bunch of white tables with various products laid out on top. Seems to me we should expect better of our churches.

Steve Jobs’s reality distortion field is justly famous, and as a former marketing guy I’m deeply envious of his talents. But I have to say, there’s something wrong with the world if we’ve gotten to the point where an MP3 player or a laptop computer — even one that’s designed nicely — is somehow supposed to redeem our faith in the infinite. Yikes.