This is going to be unbearably wonky, so I apologize in advance. But I was thinking some more about Paul Krugman’s contention that Obama’s tax compromise plan might hurt his reelection chances rather than help them. He bases this on two things. First, Mark Zandi’s economic forecast suggests that the tax plan will improve GDP growth in 2011 but reduce it in 2012 (compared to a baseline forecast). Second, Larry Bartels has shown that voters are myopic: they pay far more attention to growth in election years than in other years. 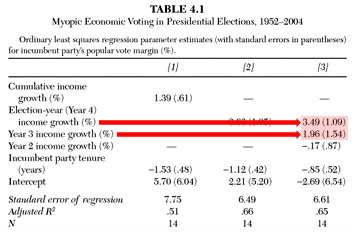 So other things being equal, a plan that lowers 2012 growth is bad for Obama even if it delivers higher immediate growth in 2011.

In other words, the tax plan reduces Obama’s vote margin by 0.6 percentage points compared to Zandi’s baseline forecast. However, there are some caveats:

In other words, Krugman has a point. However, my guess is that when you look at the whole picture, along with the fuzziness of the models, it’s most likely that the tax plan basically has an effect size of zero compared to Zandi’s baseline plan and a highly positive effect compared to letting the Bush tax cuts expire completely.