Can the United States charge Julian Assange with violation of the 1917 Espionage Act? The whole idea seems crazy to me. U.S. law applies to crimes committed on U.S. soil or, at most, to crimes committed by U.S. citizens abroad. There’s no way we can pretend 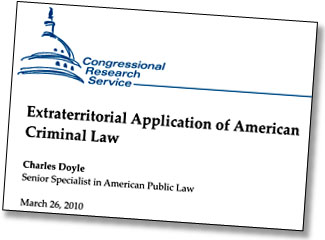 that our laws cover actions taken by a foreign national working in another country.

Which just goes to show how much I know. A recent CRS report summarized the extraterritorial application of U.S. law and concluded that there’s plenty of it:

Application is generally a question of legislative intent, expressed or implied. In either case, it most often involves crimes committed aboard a ship or airplane, crimes condemned by international treaty, crimes committed against government employees or property, or crimes that have an impact in this country even if planned or committed in part elsewhere.

Hmmm. Mostly ships and planes or crimes against humanity. But what about other kinds of laws? Here’s some more from the report:

To what extent does international law permit a nation to exercise extraterritorial criminal jurisdiction? The question is essentially one of national interests….The most common classification of these interests dates to a 1935 Harvard Law School study which divided them into five categories or principles corresponding to the circumstances under which the nations of the world had declared their criminal laws applicable: (1) the territorial principle which involves crimes occurring or having an impact within the territory of a country….(4) the protection principle which involves the crimes which have an impact on its interests as a nation.

….If the territorial principle is more expansive than its caption might imply, the protective principle is less so. It is confined to crimes committed outside a nation’s territory against its “security, territorial integrity or political independence.” As construed by the courts, however, it is understood to permit the application abroad of statutes which protect the federal government and its functions. And so, it covers […] conduct which Congress has characterized as a threat to U.S. national security.

…. General rules of statutory construction….The first of these holds that a statute will be construed to have only territorial application unless there is a clear indication of some broader intent. A second rule of construction states that the nature and purpose of a statute may provide an indication of whether Congress intended a statute to apply beyond the confines of the United States. Although hints of it can be found earlier, the rule was first clearly announced in United States v. Bowman.

….The natural implications of Bowman and Ford are that a substantial number of other federal crimes operate overseas by virtue of the implicit intent of Congress. In fact, the lower federal courts have read Bowman and Ford to suggest that American extraterritorial criminal jurisdiction includes […] (4) counterfeiting, forging or otherwise misusing federal documents or checks overseas by either Americans or aliens.

If this is correct — and if I’m interpreting it correctly — it means that the Espionage Act might apply to Assange after all if (a) the text of the statute suggests an intent for it to apply overseas, or (b) the Department of Justice decides that Assange’s actions are a threat to national security or can be construed as “misuse” of federal documents. Beyond that, of course, there’s also the question of whether his actions violate the provisions of the law in the first place, and whether he has a First Amendment defense even if they do.

This seems like tenuous stuff (though Julian Ku says here that “The Espionage Act has long been held to apply to foreign nationals who commits acts while abroad”) and in practice it’s meaningless unless some foreign country is willing to arrest Assange and extradite him to the U.S. based on this legal reasoning. Which makes it even more tenuous. But not quite as outlandish as I thought, apparently. Further analysis is welcome from anyone with experience in this area.

UPDATE: Mark Hosenball talks to some experts here and concludes that prosecutors “could face insurmountable legal hurdles” if they tried to bring a case against Assange.

UPDATE 2: Trevor Timm lays out the case here for believing that even if the Espionage Act can be applied to foreign nationals residing on foreign soil, WikiLeaks hasn’t violated the act in the first place. So it’s a moot point.