The LA Times greets my return to blogging with some grim news this morning:

Prices of previously owned single-family homes fell 0.8% in October from the same time last year, according to the Standard & Poor’s/Case-Shiller index of 20 metropolitan areas. The closely watched index fell 1.3% from September to October as six metro areas hit fresh lows.

“It is grim, baby. We don’t see any basis for sustained price increases in 2011,” said Glenn Kelman, chief executive of online brokerage Redfin. “Prices are going to be in the doldrums all year, and usually you look for housing to lead the overall recovery, but that seems doubtful.” 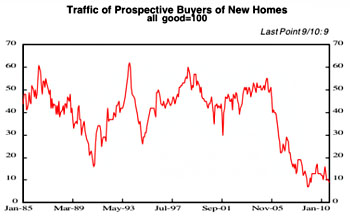 to fall again. Ezra Klein points us to Gary Shilling for more, and I find Shilling partly persuasive and partly not. However, the bulk of his argument is sound, especially his observation that housing inventory is still abnormally high:

This huge and growing surplus inventory of houses will probably depress prices considerably from here, perhaps another 20% over the next several years. That would bring the total decline from the first quarter 2006 peak to 42%.

This may sound like a lot, but it would return single-family house prices, corrected for general inflation and also for the tendency of houses to increase in size over time, back to the flat trend that has held since 1890.

I guess, in the end, I’m not quite sure if I’m that pessimistic. But I’d say that a further decline of 10% is almost inevitable, and 20% is certainly quite possible. What that does to the broader economy is still a question mark.