I never know quite how seriously to take Politico-style inside gossip pieces, but this one from Glenn Thrush strikes a chord:

Obama’s advisers insist he didn’t go out of his way to pick a fight with fellow Democrats when he cut his highly controversial deal with Republicans to temporarily extend all Bush-era tax cuts earlier this week. 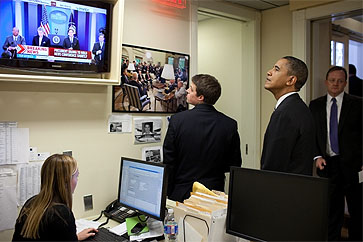 But if the deal served to distance Obama not only from them, but the entire partisan culture of Washington, all the better, they say. Differentiating Obama from congressional Democrats “was a positive byproduct” of the tax cut deal, a person close to Obama told Politico.

….One administration official told Politico that Obama was so dispirited after his Nov. 18th meeting with the Democratic leadership that he decided, then and there, to place his faith in direct talks with Senate Minority Leader Mitch McConnell (R-Ky.). “The point is the House and Senate [leadership] has proven they are incapable of getting things done,” the official said.

And here’s the dueling anonymous quote from Capitol Hill:

Several senior congressional Democratic staffers told Politico they are tired of Obama and his aides blaming them for failing to muster the votes to block an extension for the rich….“When they want to fight, they know how to fight. When they want to cave, they know how to blame others,” said a disgusted senior Democratic congressional leadership aide.

Politico and its ilk thrive on controversy, and I imagine this piece probably overstates things. But if I were forced to choose, I think I’d side with Obama on this one. I mean, if congressional Dems were able to get him a better deal, how likely is it that Obama would reject it just because he wants to “distance himself” from Congress? That just doesn’t ring true. Congressional Dems simply haven’t shown any spine or any negotiating ability on tax issues. Maybe Obama bears some of the blame for that, but you can only lead a party that’s willing to be led in the first place. The Democratic caucus doesn’t seem to be.