Austin Frakt points to the latest figures from Massachusetts, which implemented Mitt Romney’s universal healthcare scheme a few years ago, and the news is pretty good. Nearly 98% of Massachusetts residents are now insured, including 97% of working age adults and nearly 100% of children and the elderly. At a guess, the outlier result among Hispanics is mostly 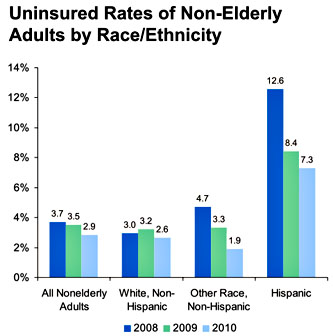 due to noninsurance among undocumented workers, which means the insurance rate among legal residents is probably close to 98%. Thanks Mitt!

So how did Massachusetts do it? The answer, of course, is that RomneyCare includes an individual mandate. You’re required to buy health insurance or else face a penalty. This, along with subsidies for poor people, has prompted nearly everyone to get insured.

Which is as good an opportunity as any to muse on the weirdness of the U.S. constitution. How is it, after all, that a mandate to buy health insurance is plainly legal for the state of Massachusetts, but a district judge can rule that it isn’t legal for the federal government? The answer, of course, is that the U.S. constitution is an odd duck: it doesn’t simply allot power between the central government and the states, which is a fairly common feature of democratic constitutions, nor does it merely prohibit the central government from doing certain things, which is also common. It goes further: it specifically lays out the things the federal government is allowed to do. If it’s not on the list, it can’t be done.

State governments, as well as most other constitutional democracies, aren’t set up this way. The state of Massachusetts can basically do anything it wants as long as it’s arguably rational and not specifically prohibited or reserved to the federal government. And this works out fine, which is why it’s so odd to hear opponents of a federal individual mandate chatter so furiously about slippery slopes and tyranny. After all, the argument goes, if the commerce clause of the constitution is interpreted to mean the federal government can force you to buy health insurance, what can’t the federal government do?

Well, they can’t keep you from owning a gun, they can’t deny you a fair trial, they can’t stop you from voting, and they can’t prohibit you from saying anything you want. Among other things. But if all 50 states in the union can force you to buy health insurance, and none of them have yet turned into tyrannies because of it, why should we think that allowing the federal government the same power might turn it into a tyranny?

There’s no reason, really, except the status quo. We have this weird constitution, forged by men who were indisputably brilliant but nonetheless scarred by recent events and writing a democratic governing document for the first time in history. All things considered, they did a helluva job. But the Apple II was a helluva job too, and that doesn’t mean it was the last word in personal computers. The enumerated powers of the constitution may be something we have to live with, but living with it for two centuries shouldn’t blind us to the fact that it’s still a pretty strange restriction on the power of our central government.