If you look at the numbers alone, the tax cut deal looks to have robbed Republicans blind. The GOP got around $95 billion in tax cuts for wealthy Americans and $30 billion in estate tax cuts. Democrats got $120 billion in payroll-tax cuts, $40 billion in refundable tax credits (Earned Income Tax Credit, Child Tax Credit and education tax credits), $56 billion in unemployment insurance, and, depending on how you count it, 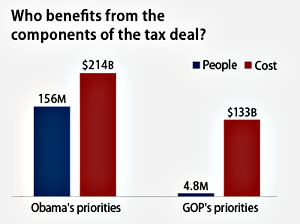 about $180 billion (two-year cost) or $30 billion (10-year cost) in new tax incentives for businesses to invest.

So that’s $125 billion for Republicans and $216 billion for Democrats (not counting the business investment stuff). Yay Democrats!

Or not. As Ezra says later, quoting a senior administration official, “Republicans were extremely eager to get benefits for the top tenth of a percent of Americans.” And when you’re dealing with such a tiny number of people, a small pot of money goes way, way further than a bigger pot divided up among the vast majority.

Over the past 30 years the wages of most Americans have grown more slowly than the rate of overall economic growth. The difference isn’t much: maybe half a percentage point or so. It’s easy not to notice, or to handwave away if you do decide to notice it. But over 30 years, that adds up to a lot of money if it all gets funneled to the top 1%. This is fundamental to understanding what’s happened to the American economy in recent decades: a little bit of money from a large number of people becomes a very large amount of money when it gets channeled into the bank accounts of a tiny number of wealthy rentiers.

So is $216 billion vs. $125 billion a victory for the common man? Of course not. It means most of us get a few hundred dollars while the rich get hundreds of thousands or even millions each. The rich are willing to make that deal every day. Wouldn’t you?

UPDATE: The chart above, from CAP’s Michael Linden, illustrates the whole thing graphically.