Underlying all the Tea Party’s issues and complaints, it appears to me, is the entirely legitimate issue of the relationship between the individual and the federal government. But why would this concern about oppressive, 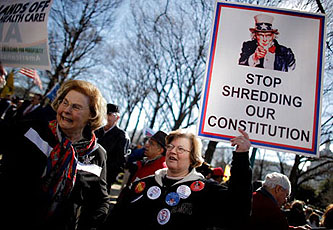 intrusive government become so acute now? Why didn’t, say, government surveillance of domestic phone calls and e-mails get the constitutional fundamentalists all worked up?

This is just a mindless talking point. And not even a very good one. Liberals and conservatives have always had a different view about what’s oppressive and what’s not. And the conservative view has always been that strong police power isn’t oppressive. They believe that keeping firm order is a core part of government’s job — a necessary precondition for true liberty — and so they’ve always been in favor of things like widespread surveillance, weak Fourth Amendment rights, active and intrusive antiterrorist policies, and giving police a pass when they get a wee bit rougher with suspects than the law might technically allow. Obviously we liberals have a different point of view, but to pretend that it’s hard to square conservative support of Bush-era policies they’ve always supported with conservative opposition to Obama-era policies they’ve always opposed is pretty disingenuous.

As for Robinson’s broader point — “I can’t help believing that the Tea Party’s rise was partly due to circumstances beyond his control — that he’s different from other presidents, and that the difference is his race” — it’s fine as long as there’s a pretty strong emphasis on “partly.” I don’t think there’s much question that racial animus has played a role in the tea party movement, but if Obama weren’t black it would just be something else. It’s not as if we haven’t seen this show before, after all.