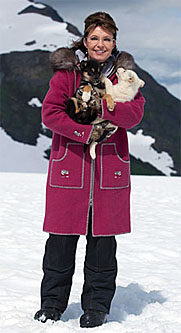 This is a genuine question. Robert Draper has a long profile of Sarah Palin in the New York Times Magazine this week, but although it’s interesting here and there, I can’t make sense out of this passage:

I brought up her past efforts at bipartisanship [as governor of Alaska] to Palin. “I was so innocent and naïve to believe that I would be able to govern for four years and if I ever moved on beyond the governorship I could carry that with me nationally,” Palin said. “And it was proven when John McCain chose me for the nomination for vice president; what it showed me about the left: they go home. It doesn’t matter what you do. It was the left that came out attacking me. They showed me their hypocrisy; they showed me they weren’t willing to work in a bipartisan way. I learned my lesson. Once bitten, twice shy. I will never trust that they are not hypocrites until they show me they’re sincere.”

What does this mean? Wouldn’t you expect the left to attack a Republican vice presidential candidate? Bipartisanship isn’t really a factor in a political campaign. Do you suppose she’s referring just to attacks from Democrats that she had worked with in Alaska? Or to all Democrats? Or just certain bloggers? Or what?