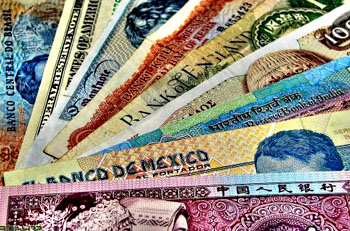 One of the effects of the Fed’s new quantitative easing program is that it will weaken the dollar slightly and possibly reduce the U.S. trade deficit a bit. That’s a positive thing, but the Wall Street Journal reports that international reaction to the Fed’s program is growing increasingly harsh:

Global controversy mounted over the Federal Reserve’s decision to pump billions of dollars into the U.S. economy, with President Barack Obama defending the move as China, Russia and the euro zone added to a chorus of criticism.

….On Monday, China’s Vice Finance Minister Zhu Guangyao said the U.S. isn’t living up to its responsibility as an issuer of a global reserve currency. The Fed’s move doesn’t “take into account the effect of this excessive liquidity on emerging-market economies,” he said.

The top economic aide to Russian President Dmitry Medvedev said Russia will insist at the G-20 summit that the Fed consult with other countries ahead of major policy decisions.

This is just crazy. Exporting countries like China and Germany have relied on the United States as the ultimate consumer nation for years. The whole world has. And everyone knows this is unsustainable. Schäuble calls it a “deep crisis” and he’s right.

But they’re addicted to it every bit as much as we are, which is why they go nuts when we take (extremely modest) measures to weaken the dollar in an effort to get our trade balance just a bit more balanced. So they need to make up their minds. Do they think America can run trade deficits forever? Or do they think we need to get our trade house into some semblance of order? If it’s the latter, do they think we should start doing it now, or should it always be put off until “someday”? What exactly do they want?

Trade deficits can’t last forever. Period. The only question is whether America’s trade deficit goes away slowly and steadily, or if it goes away all at once during some kind of global panic. The rest of the world, to judge by their hysteria over the Fed’s actions, is willing to risk the panic as long as it happens sometime in the future and mostly affects us. I’m not.