Another day, another confusing magazine article about American education. This one is by Amanda Ripley in the Atlantic, and it focuses solely on how our top performing students do compared with those in other countries. In particular, how do our top students do in math?

We’ve known for some time how this story ends nationwide: only 6 percent of U.S. students perform at the advanced-proficiency level in math, a share that lags behind kids in some 30 other countries, from the United Kingdom to Taiwan. But what happens when we break down the results? Do any individual U.S. states wind up near the top?

Incredibly, no. Even if we treat each state as its own country, not a single one makes it into the top dozen contenders on the list. The best performer is Massachusetts, ringing in at No. 17….“If all American fourth- and eighth-grade kids did as well in math and science as they do in Massachusetts,” writes the veteran education author Karin Chenoweth in her 2009 book, How It’s Being Done, 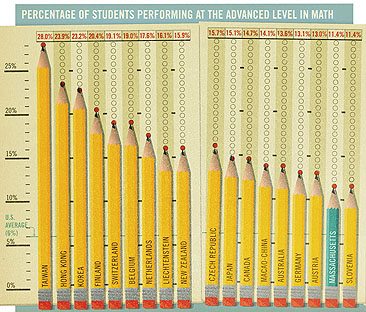 “we still wouldn’t be in Singapore’s league but we’d be giving Japan and Chinese Taipei a run for their money.”

Aha! Massachusetts may not be up there with Taiwan or Japan, but they’re better than any other state in America. So what’s their secret?

Is it because Massachusetts is so white? Or so immigrant-free? Or so rich? Not quite. Massachusetts is indeed slightly whiter and slightly better-off than the U.S. average. But in the late 1990s, it nonetheless lagged behind similar states — such as Connecticut and Maine — in nationwide tests of fourth- and eighth-graders. It was only after a decade of educational reforms that Massachusetts began to rank first in the nation.

What did Massachusetts do? Well, nothing that many countries (and industries) didn’t do a long time ago. For example, Massachusetts made it harder to become a teacher, requiring newcomers to pass a basic literacy test before entering the classroom. (In the first year, more than a third of the new teachers failed the test.) The state also required students to pass a test before graduating from high school — a notion so heretical that it led to protests in which students burned state superintendent David Driscoll in effigy. To help tutor the kids who failed, the state moved money around to the places where it was needed most. “We had a system of standards and held people to it — adults and students,” Driscoll says.

Wait a second. The literacy test sounds like a good idea, but it seems fairly disconnected from the performance of our top math students. California has required new teachers to pass both a literacy and math test for nearly 20 years and we rank barely above Turkey in advanced math proficiency. Ditto for a high-school graduation exam, which plainly doesn’t have any impact on top-tier students who have been performing above the basic graduation level all along.

And that’s it. Maybe Massachusetts did some other stuff, but I assume Ripley chose to highlight their most important reforms, not the trivia. And their most important reforms seem pretty unlikely to have affected the math scores of our crème de la crème. So what’s the deal? Once again, after reading a popular account of education reform, I’m more confused than I was when I started.