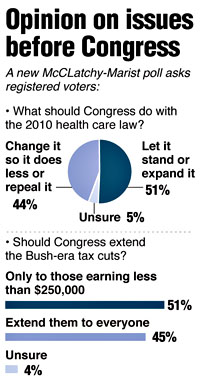 You could hardly expect me not to post about this, could you?

A majority of Americans want the Congress to keep the new health care law or actually expand it, despite Republican claims that they have a mandate from the people to kill it, according to a new McClatchy-Marist poll.

….The results signal a more complicated and challenging political landscape for Republicans in Congress than their sweeping midterm wins suggested. Party leaders call the election a mandate, and vow votes to repeal the health care law and to block an extension of middle-class tax cuts unless tax cuts for the wealthy also are extended.

“The political give and take is very different than public opinion,” said Lee M. Miringoff, the director of the Marist Institute for Public Opinion at Marist College in Poughkeepsie, N.Y., which conducted the poll. “On health care, there is a wide gap between public opinion and the political community.”

Unsurprisingly, the poll finds that most provisions of the healthcare reform bill are quite popular. The main exception is the individual mandate, but as we’ve discussed a million times, you can’t keep all the popular stuff unless you have the mandate too.

In less good news, the public is evenly split on repealing Don’t Ask Don’t Tell. I’ve seen plenty of other polls showing broad support, so this might be an outlier. Alternatively, it might be that support for repeal drops once it become an immediate issue getting a lot of attention. We’ll see.