Adam Serwer reads the Wall Street Journal today and finds a story saying that Senate Democrats are planning to jettison repeal of DADT from this year’s Pentagon funding bill:

Look, if Democrats can’t repeal a policy more than two thirds of the American people, including a majority of conservatives want gone then they can’t expect people to vote for them….That Democrats would cave on this now shows how far the party of Harry Truman has fallen. In December the Defense Department is reportedly set to release a study showing that, like the American people, most servicemembers aren’t opposed to gays and lesbians openly serving. That’s in contrast to the vast opposition of most servicemembers to racial integration in the 1940s; if Truman had insisted on staying his hand until a political climate as favorable as this one had 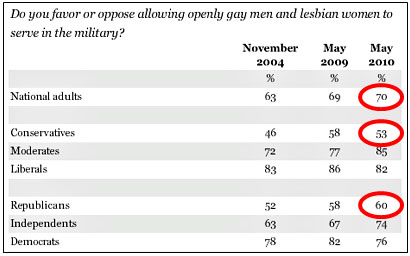 come along, integrating the military might not have happened until decades later.

Democratic spinelessness on this is worth mocking. But let’s get real: the problem isn’t with Senate Democrats, 97% of whom voted to repeal DADT in September. The problem is with Republicans, 100% of whom voted against repeal even though, as the Gallup poll above shows, repeal is favored by 60% of Republicans, a majority of conservatives, the Secretary of Defense, and the chairman of the Joint Chiefs of Staff.

100%. Not one single Republican was willing to buck the tea party hordes and vote for DADT repeal. Even Susan Collins of Maine, the only Republican who publicly supports repeal, concocted a transparently bogus excuse not to vote for it.

Democrats may not be profiles in courage here, but they aren’t the villains on DADT repeal. They just aren’t. Republicans are. They’re willing to unanimously filibuster funding for the military in order to pander to the small percentage of their own party that thinks gay people are icky. And they’ll keep doing it, too. They don’t care about the military report due in December and they don’t care whether DADT repeal would actually affect military readiness in any way. They’ll defund the entire Pentagon if that’s what it takes to keep the tea partiers happy. They’re the enemies of national security here, not Democrats.