So what caused the “flash crash” of May 6th? Today the SEC and the CFTC issued a joint report confirming earlier speculation: it was caused by a large sell order on E-Mini futures contracts, a security that mimics trading in 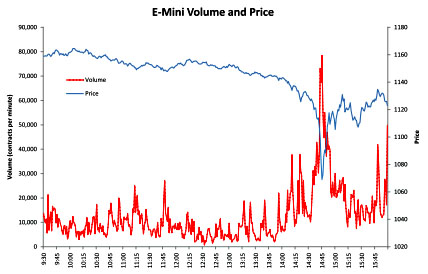 the S&P 500 stock index. Before it happened, the market was already on edge over reports of the crisis in Greece:

At 2:32 p.m., against this backdrop of unusually high volatility and thinning liquidity, a large fundamental trader [Waddell & Reed Financial of Kansas] initiated a sell program to sell a total of 75,000 E-Mini contracts [at] an execution rate set to 9% of the trading volume calculated over the previous minute, but without regard to price or time.

The execution of this sell program resulted in the largest net change in daily position of any trader in the E-Mini since the beginning of the year (from January 1, 2010 through May 6, 2010)….Lacking sufficient demand from fundamental buyers or cross-market arbitrageurs, HFTs began to quickly buy and then resell contracts to each other — generating a “hot-potato” volume effect as the same positions were rapidly passed back and forth.

….At 2:45:28 p.m., trading on the E-Mini was paused for five seconds when the Chicago Mercantile Exchange (“CME”) Stop Logic Functionality was triggered in order to prevent a cascade of further price declines. In that short period of time, sell-side pressure in the E-Mini was partly alleviated and buy-side interest increased. When trading resumed at 2:45:33 p.m., prices stabilized.

“Significantly,” says the New York Times, “the report found that the plunge was not caused by any market manipulation but by a single firm trying to hedge its investment position, if in an aggressive and abrupt manner.” Does this make me feel any better? Not really. Market manipulation can be monitored and regulated, at least in theory. But a large sell order? If a $4 billion E-Mini dump can wipe out the market just because it’s a little jittery over events in Greece, that’s not a good sign that the market is inherently very stable. And remember, this stuff all happened within five minutes, with prices apparently stabilized by a five-second trading pause at 2:45:28. This stuff isn’t even happening at human speeds anymore. Kinda scary.