Sen. Susan Collins (R–Maine) writes that the Senate has become increasingly nasty and partisan. For example:

During the past two years, the minority party has been increasingly shut out of the discussion. Even in the Senate, which used to pride itself on being a bastion of free and open debate, procedural tactics are routinely used to 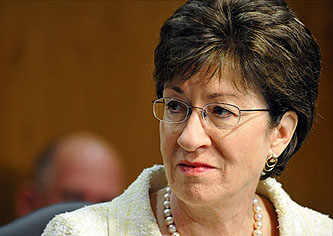 prevent Republican amendments. That causes Republicans to overuse the filibuster, because our only option is to stop a bill to which we cannot offer amendments.

It’s true that Harry Reid has filled the amendment tree a little more often than his predecessors: nine times in the 110th Congress vs. six times for Bill Frist in the 109th. And while I can’t find a tally for the 111th Congress, I wouldn’t be surprised if it were higher still. But is Collins seriously trying to suggest that this is the direction that causality runs? That Republicans are only resorting to filibusters and other delaying tactics because they haven’t been allowed to offer serious, substantive amendments more regularly?

I’m willing to be schooled by a congressional expert on this, but reality seems just the opposite: Republicans have adopted a whole host of aggressive delaying tactics since they became a minority party, and one of them is the practice of offering dozens or hundreds of dilatory amendments in order to suck up endless floor time. The only way to avoid that is to fill the amendment tree, invoke cloture, and then try to round up 60 votes. If you don’t, your bill is effectively dead.

I’ll be curious to see if any veteran Congress watchers weigh in on this. I don’t doubt that Democrats have become more tactically aggressive over the years, but in this case it really doesn’t seem that they were the first movers. Comments welcome on this.