The prevailing question about John McCain this year is: What happened? What happened to that other John McCain, the refreshingly unpredictable figure who stood apart from his colleagues and seemed to promise something better than politics as usual? The question may miss the point….It’s possible to see McCain’s entire career as the story of a man who has lived in the moment, who has never stood for any overriding philosophy in any consistent way, and who has been willing to do all that it takes to 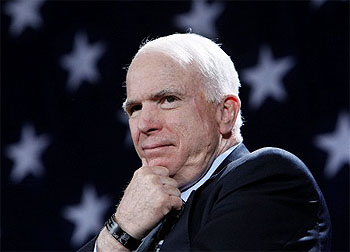 get whatever it is he wants. He himself said, in the thick of his battle with Hayworth, “I’ve always done whatever’s necessary to win.” Maybe the rest of us just misunderstood.

I’m hardly the best judge of character in the world, but I confess that the McCain phenomenon has always baffled me. Even back in the glory days of the Straight Talk Express he seemed like a consummate phony to me, sucking up to reporters not because he was being unusually candid, but because it seemed like a good strategy to beat a well-financed guy who was running ahead of him. He’s always been nasty, he’s always been hot tempered, he’s always looked out for number one, and he’s always been willing to take whatever position was convenient at the time. All politicians shade their messages now and again, but on that score McCain has always been a politician’s politician.

Or so it seemed to me. I’ve never understood how he managed to convince so many people otherwise for so long.