The Economist’s Matt Steinglass, responding to yesterday’s post about skyrocketing incomes of the rich, offers this note:

A few years back, this paper did an extended investigation of increasing CEO compensation, and found that while “abuses and downright crookery” were part of the story, CEO pay gains were justified by increased returns to investors. That, however, was in 2007, before the global financial crisis erased many of those gains.

This is revealing about high-end pay packages on two levels. Increased compensation has mostly been the effect of huge pay increases in the financial sector and among Fortune 5000 executives. But as Matt points out, the increasing 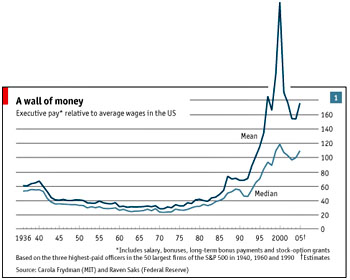 returns their companies enjoyed were largely illusory. That’s now a lot more obvious than it was five years ago, but there’s nonetheless been no movement to reduce executive/financial pay in response.

Still, not all of those increasing returns were illusory. A lot of it was perfectly real. More broadly, then, the question is this: if returns are increasing everywhere, do CEOs as a class deserve ever increasing pay packets? Why? If a single company does significantly better than its competitors, that’s a sign that its executive team is doing something right. But if the global economy as a whole is booming, and most companies are just riding the wave, that’s a sign of absolutely nothing. CEOs as a class aren’t responsible for global economic conditions, and individual CEOs deserve no special consideration for merely benefitting from a growing economy.

As soon as that changes, I’l be open to arguments about CEOs deserving their astronomical pay packets. But there’s no sign of it yet.