Dana Milbank, Media Matters, and Steve Benen are promoting the idea that Glenn Beck bears some responsibility for Byron Williams’ recent shootout with highway patrol officers on a freeway near Oakland. After all, Williams later said he was 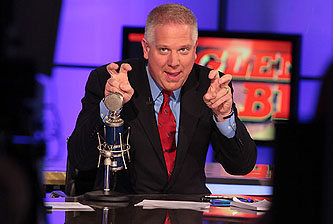 planning to kill people at the Tides Foundation and the ACLU thanks largely to things he learned from watching Beck’s TV program. Here’s Steve, for example:

I continue to strongly believe criminals are ultimately responsible for their crimes, but Beck is whipping up a confused and easily-misled mob into a rage, lying to them with deranged theories, and pointing them in a direction. That’s legal and his speech is protected by the First Amendment. But the sooner Beck, his network, his sponsors, and the media conglomerate that signs his checks show some restraint, and take some responsibility for dousing a simmering flame with lighter fluid, the safer we’ll be.

This is carefully hedged, but it still goes too far for me. Beck is a conspiratorial loon, but he’s just not responsible for a guy like Williams. Full stop. No more than environmentalists are responsible if some crackpot takes a shot at the CEO of Exxon or Keith Olbermann is responsible if one tosses a bomb onto the floor of the New York Stock Exchange.

If Beck were advocating violence, that would be one thing. But he isn’t and hasn’t. Ever. Fox ought to take Beck off the air, but they should do it because he’s crazy and promotes ignorance, not because Byron Williams says he learned about the Tides Foundation from him. This is not a game that liberals should start dipping their toes into.

UPDATE: This isn’t a very popular post. I’m disappointed, but not surprised. Unfortunately, the general attitude of the anti-Beck commenters is, “There are lots of unstable folks out there, so you should be careful what you say.” I don’t find that a very persuasive argument from the left, and I promise not to find it a persuasive argument the next time it comes from the right either. Not from Pam Geller aimed at Muslims, not from Andy McCarthy aimed at NSA whistleblowers, and not from Ari Fleischer saying that Americans need to “watch what they say, watch what they do.” Sorry gang.

Atrios says he generally agrees that media figures aren’t responsible for the actions of the mentally deranged who listen to them, but “Having said that, it is the case that Beck really is getting close to, and crossing, that line by using obvious violence-endorsing rhetoric even as he disavows the violence part.” OK. But he needs to cross the line first.

I know Kevin’s right. Really, I do. But to augment an old metaphor, I feel like Beck is close to the point at which he’s in a crowded theater shouting, “Fire! But try not to trample anyone. There’s a fire right here in this very theater that may kill you! But there’s no need to make a mad dash for the exits.”