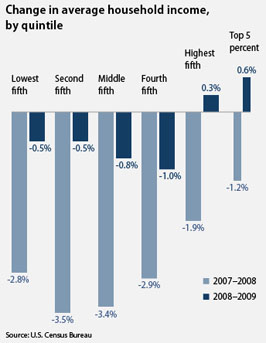 I tweeted this over the weekend, but it really deserves a weekday post of its own. It comes from Michael Linden and Heather Boushey and it shows how incomes have changed just during the recession of the past two years. In both years, the well-off did better than the poor and the middle class, and last year the well-off and the rich actually improved their lot while everyone else continued to slide.

This is only a two-year snapshot, so you don’t have to worry about different inflation rates or different consumption baskets or any of that stuff. None of it is anywhere big enough to matter over the course of 24 months. Basically, the story of the past decade is this: the rich did really well during the Bush years while the middle class stagnated (even the inequality skeptics don’t really question this); the rich got some great tax cuts at the same time; and then, when the recession caused by their recklessness hit, they suffered the least while the poor and middle class suffered the most:

All those facts and figures reinforce what most people already know: The middle class took this recession right on the chin while the rich suffered no more than a glancing blow. And yet somehow in Washington the talk is all about tax cuts for rich people.

….This is how absurd our national conversation has become. We’re actually fighting over whether we should borrow hundreds of billions of dollars and give that money to the only group of people in the country who are already back on track. Instead of focusing on a policy that would exclusively benefit those who make more than $250,000 a year we should be discussing how to get wages and middle-class incomes rising again, the best ways to bring people out of poverty, and what we can do to address the ever-widening disparities between the super-rich and everyone else. Our priorities are indeed skewed when the dominant argument over economic policy pertains to $100,000 tax cuts for millionaires while our middle class is barely treading water.

“Absurd” only barely begins to describe this. Disgraceful and revolting are more like it.