From a recent National Journal poll:

The perception that bickering is on the rise has doubled since January 2009, when Obama took office and 50 percent of respondents thought the two parties were working together more than in the past. That number had dropped to 25 percent by early April, 2009. This week it came in at eight percent.

Well, that seems accurate enough. I sort of wonder who the 8% are who persist in believing the parties are working more closely than in the past, but still, not bad, American public! Unfortunately, the American public then blew it on the next question: 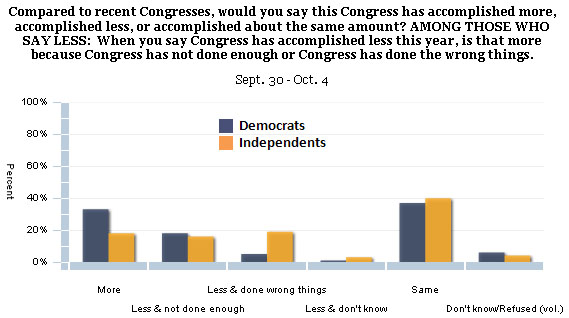 At first, it’s hard to make sense of this. Whether or not you approve of what Congress has done this term, they’ve done a lot. There’s the big three, of course: a huge stimulus package, healthcare reform, and financial reform. And then plenty of smaller things: the Lilly Ledbetter Act, college loan reform, rescuing GM and Chrysler, credit card disclosure, gas mileage improvements, and plenty of other stuff. So why the disconnect?

I’d guess four things are at work here. First, the public has no idea how much major legislation usually gets passed in a single congressional session. So even if they’re aware of the three major bills that passed this term, they don’t realize that’s more than usual.1 Second, they don’t perceive that most of this stuff affects them. Stimulus has gotten a bad rap, healthcare reform doesn’t take effect until 2014, and financial reform is too abstract to understand. Third, their bar is set high. Sure, three big things got done, but they expected more. What about climate change? And immigration reform? And DADT repeal? And closing Gitmo? And four, the economy sucks. As long as Congress hasn’t fixed that, nothing else really matters.

1And in fairness, compare Obama’s first two years to George Bush’s first two years. Bush got a big tax cut, declared war on al-Qaeda, passed the PATRIOT Act, passed Sarbanes-Oxley, and signed campaign finance reform into law. Compared to that, it’s not clear why the average citizen should consider the current Congress any more successful than usual.