Paul Krugman on (one of) the differences between George Bush and Barack Obama:

Bush and his handlers were masters of dog-whistle politics — of conveying to their base, in ways that went under the radar of mainstream media, the message that he was really one of them….Obama, however, seems to go out of his way to convey the message that although he rode to office on a wave of progressive enthusiasm, he and his people don’t respect the people who got him where he is….In fact, it often seems to me that there’s an almost compulsive aspect to the administration’s anti-dog whistling. Maybe it comes from hanging out with the political and business establishment, which leads to a desire to seem respectable by dissing 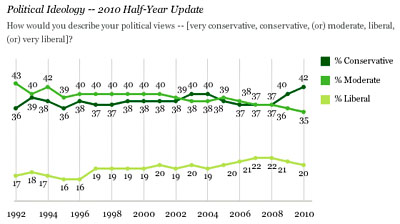 the DFHs. But memo to the president: Wall Street will hate you anyway. All you’re doing is undermining the enthusiasm of people you need.

I agree, but I’ll repeat a point I made a few weeks ago: this is baked into the cake of modern American politics. Every local race has its own dynamics, but it’s still worth taking a look at the Gallup chart on the right to get a sense of the broad national hole that liberals are in. About 40% of the electorate self-identifies as conservative and getting their votes is critical for any conservative politician. If you piss off a few moderates in the process, that’s life. After all, if you win the conservative base convincingly, then on average you only need to hold on to the most conservative 10% of moderates to win an election.1

But only 20% of the electorate self-IDs as liberal. So the math is exactly the opposite: you need to win nearly all the moderates in order to win an election. If you piss off centrists by playing too hard to the base, you’ll lose.

This is a bummer, but it’s reality, and lefties really need to suck it up and get less annoyed by the fact that politicians react to the world as it is, not as we wish it were. Like it or not, most pols just can’t afford to give the liberal base too much rhetorical lip service until and unless it gets a lot bigger than it is today.2

Still, there’s a mystery here. Not why Obama feels the need to market himself the way he does, but why he lately seems so clumsy at it. As Krugman implies, dog whistling can be subtle but still clear. So where’s the subtlety in the Obama White House these days?

1To repeat: on average. Every district is different. But the national numbers still give you a good idea of what party leaders are going to do and which way most politicians are likely to lean in their rhetoric.

2Which, granted, would be more likely to happen if more liberal politicians tried to help out on this score. Still, the self-ID numbers have barely budged in over 40 years, so the basic imbalance isn’t likely to change anytime soon.