Via John Sides, here’s a fascinating paper from political scientists Sean Theriault and David Rohde. They first note that virtually all models suggest that the Senate should be less politically polarized than the House. Partly this is because you can’t gerrymander states and partly it’s because the nature of the Senate generally demands bipartisan cooperation to get anything done. In reality, however, it turns out that the current Senate is just as polarized as the House. Why?

They suggest a simple answer: it’s due to the effect of “Gingrich Senators.” That is, almost all of the increased polarization in the Senate over the past three decades is due to House members elected since 1978 who have since migrated to the Senate. From the paper: 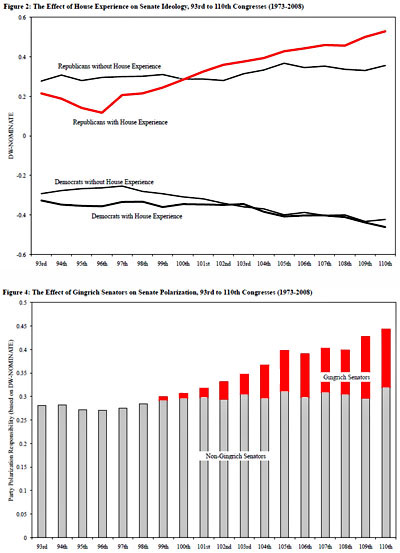 polarization are those senators who are jointly (1) Republican, (2) former House members, and (3) elected to Congress after 1978. These traits are not additive.  If a senators has one — or even two — of these traits, she is no more likely to be systematically more polarizing than her colleagues. It is the combination that systematically increases a senator’s polarizing tendencies.

The bottom chart shows the end result. If you remove the Gingrich Senators, you see that Senate polarization increased a bit during the 80s and then just a bit more after that. But add in the Gingrich cohort (red bars) and polarization skyrockets.

Take from this what you will. But there’s not much question that the radicalization of House Republicans during the 80s and after was largely a Newt Gingrich phenomenon, and Theriault and Rohde demonstrate pretty convincingly that he was eventually responsible for the radicalization of the Senate too. Nice work, Newt.