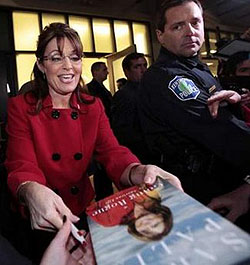 But via Chris Bodenner, here’s the author of the piece chatting with Joe Scarborough this morning:

“The worst stuff isn’t even in there,” Michael Joseph Gross said on “Morning Joe” Thursday. “I couldn’t believe these stories either when I first heard them, and I started this story with a prejudice in her favor. I have a lot in common with this woman. I’m a small-town person, I’m a Christian, I think that a lot of her criticisms of the media actually have something to them. And I think she got a bum ride, but everybody close to her tells the same story.”….”This is a person for whom there is no topic too small to lie about,” he said. “She lies about everything.”

Holy cats. I would really like to hear about this from people who know Gross. Was he really sympathetic to Palin going into this? Because if he was, this is the most unbelievable volte face I’ve ever read. I mean, he literally describes an entire town — hell, practically an entire state — that is absolutely scared to death to talk about Palin because they’re afraid of the vengeance she’ll wreak on them for doing it. He describes a woman with a paranoid streak a mile wide, a temper like a hellcat, and a casual meanness toward ordinary people that defies belief. There were so many examples of people saying they were afraid to talk to him that it almost seemed like it had to be a joke. (“The people of Wasilla, in the main, are reflexively generous and open….When I ask about Palin, though, a palpable unease creeps in. Some people clam up. Others whisper invitations to call later—but on this number, not that one, and not before this hour or after that one. So many people answer “Off the record?” to my initial questions that it almost seems the whole town has had media training.”1)

1In fairness, by this time probably every resident of Wasilla has been interviewed at least half a dozen times about Palin. They’re probably pretty press savvy by now.