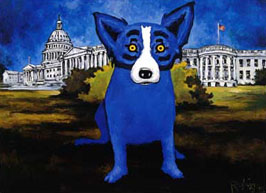 Are the Blue Dogs congenital morons? Wait. Don’t answer that. First read this passage about their support for extending the Bush tax cuts for the wealthy:

“People are very imprecise with the way they are talking about it and reporting it,” Rep. Chris Van Hollen (D-Md) said in an interview last week. “The Blue Dogs have not proposed a permanent tax increase for the wealthy, just a temporary plan….They are working to identify offsets in the event that they are doing a one- or two-year extension [for the wealthy], which is totally different from the Republican plan.”

In an interview with the Huffington Post on Thursday, Rep. James Cyburn (D-S.C) the House Majority Whip, confirmed that Blue Dogs are working on a plan to identify specific cuts in government spending as a means of paying for a temporary extension for tax cuts for the wealthy.

Let me get this straight. It’s not just that the Blue Dogs are in favor of extending tax cuts for the rich, which is an unpopular policy. They’re also in favor of cutting programs over the next two years to pay for it. This is not only a dumb idea economically, but would almost certainly make the tax cuts even more unpopular. What’s going to be their next idea? Tax cuts for the rich, funded by spending cuts for everyone else, and while we’re at it let’s outlaw barbecuing on the 4th of July. Then people will really hate us! Jeebus.