I was on the radio yesterday chatting about my piece on the Tea Party movement in the current issue of the magazine, and although I don’t think I said anything very interesting, I was at least proud of myself for successfully remembering the names of Mike Castle and Christine O’Donnell, the Republican candidates currently duking it out for a 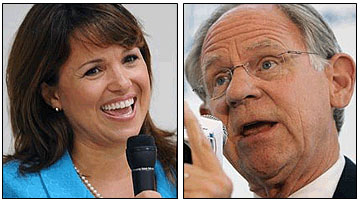 Senate nomination in Delaware. (On the other hand, I unsuccessfully remembered the name of the Koch brothers’ father, so you can’t win ’em all. It’s Fred Koch. Fred Fred Fred.)

Anyway, this came up because the host asked if the tea partiers were nuts for continually dumping centrist candidates who would be easy winners in November and instead nominating true believers who might very well lose. Think Sharron Angle in Nevada, Joe Miller in Alaska, and Rand Paul in Kentucky. As it happens, my guess is that most of these will turn out OK for the tea partiers. Paul and Miller will probably win, and although Angle is certainly the best opponent Harry Reid could have hoped for, even she has a chance.

But Delaware is the real test. Mike Castle would be a shoo-in to win in November, while O’Donnell — Delaware’s version of Harold Stassen1 until the Sacramento-based Tea Party Express got involved — is extremely likely to lose even in the current anti-Democrat environment. Nominating her would truly be a case of cutting off your nose to spite your face. E.J. Dionne writes about the Delaware race today:

Few races this year have been more clear-cut on the matter of electability: The polls demonstrate that Castle would be the favorite against a rather strong Democratic candidate, New Castle county executive Chris Coons. By nominating O’Donnell, the Republicans would hand Coons and the Democrats the seat.

Castle, at least, is not in the least bit complacent. “The Tea Party Express, which claims it’s not a political party, is in reality a pretty good political operation,” he said in an interview last night. “This is a more sophisticated political operation than they’ve been given credit for.”

He adds that what’s happening here “goes way beyond this election” — and that’s entirely true. Democrats may be rooting for O’Donnell because they need all the Senate seats they can get this year. But my hunch is that a lot of them would quietly mourn if Castle, a guy of old-fashioned decency, were to lose. If there is no longer any room for him and people like him in the GOP, it will be the clearest sign yet of a party that has decided to go off the edge.

Not me! I’m rooting for O’Donnell with no quiet mourning for Castle at all. I’m not sure at this point why Dionne still wonders “if” there’s room in the modern GOP for guys like Castle, since that seems about as clear to me as anything could possibly be. The answer is no, and Castle’s fate won’t change that one way or the other. The die has been well and truly cast here for some time: the GOP is irrevocably committed to the undiluted Fox/Limbaugh/Drudge party line, and there’s no going back. They’re either going to stand or fall on that. So I say: let ’em do it. No excuses, no scapegoats. Finish up the Texification of the Republican Party and see how it goes. Only then is there any hope of a return to common sense.