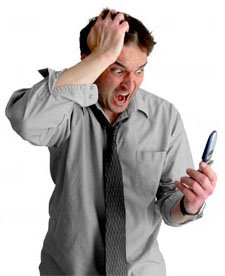 From Stephen Randall, on the demise of landlines and the growth of cell phones:

Bluetooth is ugly and frustrating; no wonder everyone likes it. Bluetooth alone has done more to destroy civil discourse than cable news and talk radio put together.

But the telephone industry has been conspiring for years to ruin landline phones too. In the old days, phones just worked. Modern phones, however, are dizzyingly variable in delivering simple sound quality.1 I’m not sure why. Do they use 10-cent microphones instead of the high-quality 20-cent microphones that would work better? Do the electronics simply not work well? Is it all down to cordless technology not being able to deliver 64 kbps of bandwidth reliably even at a distance of 20 feet? Or what? Why is the communication industry apparently so intent on making communication so unpleasant?

1And don’t get me started on headsets. I’ve tried at least half a dozen over the years and none of them work well. Is there some reason why AT&T operators in 1940 had headsets that delivered crystal clear voice quality but there’s no combination of consumer grade phone and headset in 2010 that doesn’t make you sound like you’re talking from the bottom of a well deep in one of al-Qaeda’s caves in Tora Bora?