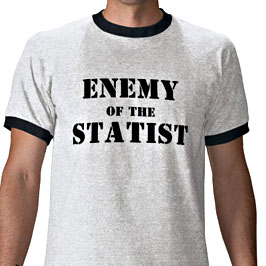 Conor Friedersdorf argues that although Matt Yglesias is a liberal, he’s not entirely a liberal:

Mr. Yglesias favors deregulating various professional cartels, ending the legally proscribed monopoly on buses that some urban public transit agencies enjoy, reforming America’s absurd system of agricultural subsidies, and making it easier for developers to build in accordance with the local demand for real estate, rather than government imposed zoning restrictions….Why does he favor some policies that conservatives like? And can we identify more of them for the sake of strategic alliances? We’ll never know if, upon learning that he is a liberal, we automatically presume that he is a “statist,” or even more absurdly, that he prefers tyranny to liberty.

In response to a similar argument yesterday, Mark Levin came out with all guns blazing:

This is so pathetic. So a liberal blogger favors regulation [I assume Levin actually means deregulation here –ed] in some respect, and this proves to Friedersdork that my characterizing the general left-wing enterprise as statist is unhelpful — to Friedersdork. So, the fact that the liberal blogger isn’t advancing big-government arguments ALL THE TIME demonstrates the inaccuracy of referring to his agenda as statist.

Levin is a loon. Equating the liberal project with tyranny is deranged, his tone is consistently obnoxious (note the childish reference to “Friedersdork,” one of his favorite bits of juvenilia), and he barely even pretends to offer arguments. He just screams into the microphone for a few hours a day.

And yet…..I actually think he has the better of things here. Let’s face it: people like Matt and me aren’t even as centrist as your average DLC Democrat of the mid-90s, let alone sympathetic in any serious way to most conservative arguments. I’m in favor of full-blown European style national healthcare, for example. Matt favors astronomical tax rates on the rich. It’s true that neither of us has any intrinsic love for a big state per se, but it’s still the case that a big state is pretty integral to attaining most of our preferred policy outcomes. And that’s true even if there are a few modest areas where we might usefully team up with conservatives — though even there it’s worth noting that of the three things Conor mentions, at least two of them (ag subsidies and zoning) are so wildly unlikely to change that favoring reform is sort of a freebie. It’s the kind of thing where you can take a contrarian philosophical stand without any serious risk that you’re ever going to be called to account for it.

Now, it’s true that I’m generally in favor of reducing or eliminating government programs that don’t work. Who isn’t? But self-interest plays a big role here, even if we don’t always like to admit it. Like Matt, I think we should eliminate ag subsidies. But that’s a pretty easy stand to take since I’m not a farmer. Earlier today I suggested we do away with Fannie Mae because we subsidize housing too much. I can afford that too, since I already own a home and don’t need any help buying one. High tax rates on the rich? That wouldn’t affect me much, so I’m OK with it. National healthcare? That would be pretty handy in case I ever want to quit my job, so that’s also in my self-interest. Fighting global warming? Well — fine. That wouldn’t really do me any good since I don’t have children and I’ll be dead before climate change causes me any personal grief. So there’s no self-interest at work there. On the other hand, I make enough money that a carbon tax wouldn’t really inconvenience me much, so I’m not exactly taking a heroic stand by advocating one.

It’s useful to know where you can find political allies. If you can find liberals who favor charter schools, less regulation of small businesses, and an end to Fannie Mae, that’s well and good. But that’s 10% or less of my worldview. I also favor high marginal tax rates on the rich, national healthcare, full funding for Social Security, more spending on early childhood education, stiff regulations on the financial industry, robust environmental rules, a strong labor movement, a cap-and-trade regime to reduce carbon emissions, a major assault on income inequality, more and better public transit, and plenty of other lefty ambitions that I won’t bother to list. If we could do all that without a bigger state, that would be fine. But we can’t. When it’s all said and done, if we lived in Drum World I figure combined government expenditures would be 40-45% of GDP and the funding source for all that would be strongly progressive. “Statist” is an obviously provocative (and usually puerile) way to frame this, but really, it’s not all that far off the mark. It wouldn’t be tyranny, any more than Sweden is a tyranny, but it would certainly be a world in which the American state was quite a bit bigger than it is now.