Hot diggity. The GOP leadership has released “Tread Boldly,” a guidebook for Republican members of Congress during the summer recess, and it includes a 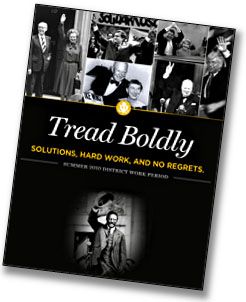 whole section called “Spending Restraint Solutions for Discussion.” Finally, we’ll get some details! So here they are:

Canceling unspent “stimulus” funds, saving up to $266 billion….Canceling excessive spending increases already in the pipeline….Cap Discretionary Spending….Freeze Congress’ Budget….Eliminate Unnecessary and Duplicative Federal Programs….Audit the Government for Ways to Save.

That’s fairly underwhelming, no? I’ll give them credit for the business about canceling unspent stimulus funds. That’s actual money. But a spending cap? Attacking waste’n’fraud? Freezing the minuscule legislative budget? “Auditing” the government? These are the hoariest tropes imaginable for anyone who wants to sound tough on spending but avoid any actual, real-life spending cuts. Where’s Social Security? Medicare? Medicaid? The Pentagon? Farm subsidies? Or any other actual, named program? Nowhere.

But there is support for extending the Bush tax cuts at a cost of $3.1 trillion over ten years. There’s no problem being specific about that. For some reason, it’s only spending they have trouble getting serious about.

POSTSCRIPT: The cover is sort of….odd, too, isn’t it? I guess all parties do the nostalgia thing now and again, but Ike and Churchill and Maggie and Reagan and Lech (what? no John Paul II?) and TR and Jack? Seriously? Two British prime ministers, and pride of place to two Republicans who modern party members wouldn’t be caught dead endorsing?

And “Tread Boldly”? Not to get too ridiculous here, but when you think of “treading,” is “boldly” really the first word that comes to mind?