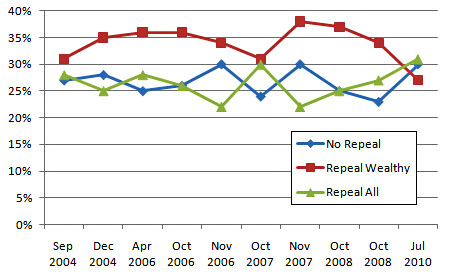 Via Ezra Klein, here is Andrew Therriault on a recent poll about whether the Bush-era tax cuts should be repealed:

The brief summary: Pew did a national poll which found that only 30% of respondents wanted to extend all of the Bush tax cuts, while 27% wanted to repeal them for the wealthiest taxpayers, and the plurality (31%) wanted to repeal ALL of the tax cuts.

….This is pretty amazing. We could argue to no end about the reasonableness of (effectively) raising taxes during a recession, but that’s not the point….What’s really important here is that, while Democratic lawmakers are clamoring to get on the tax cut bandwagon (or off of the tax increase bandwagon, if you’re thinking about attack ads), Americans appear willing to have a reasonable conversation about taxes — that is, one in which raising taxes is at least on the table.

So: it’s a no-brainer, right? Popular opinion is in favor of repealing at least the tax cuts for the wealthy by a margin of 58% to 30%. And since everyone is supposedly concerned about the budget deficit, this is a quick and popular way of reining it in. In fact, you could combine a complete repeal with a phased payroll tax holiday and even get a fiscal stimulus out of the deal. Too bad that Republicans are convinced that payroll taxes aren’t real taxes since they barely affect the rich at all. Otherwise this would be a great idea.