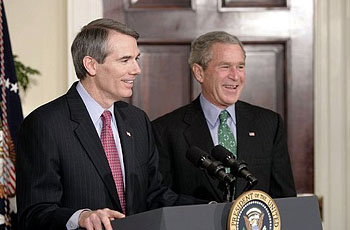 George Bush’s former budget director, Rob Portman, who’s doing well in his campaign for a U.S. Senate seat in Ohio, says voters really don’t care that he was part of the administration that helped wreck the economy over the past decade:

“What the people in this plant want to know is what you are going to do for me going forward,” Mr. Portman said. “That is all they care about, and frankly that’s what voters care about.”

“The world has moved on,” he added. “Maybe the Democrats haven’t.”

Steve Benen is gobsmacked that Ohio’s voters seem eager to support Portman “despite his background of failure” — though in fairness to Ohio’s electorate, Portman has a long record as an Ohio congressman prior to his two years as an obscure official in the Bush administration, and that’s probably what most voters are responding to.

More broadly, though, there’s no reason to be surprised anyway. As near as I can tell, Portman is right: policywise, voters really don’t care much about what you’ve done in the past. They only care about what you say you’re going to do in the future. They care about scandals in the past, and they generally seem to give politicians credit for the past policies of their parties — so Republicans get automatic credit for being budget hawks even if they’ve spent freely in the past and Democrats get credit for protecting Social Security even if they’ve voted to cut it in the past. Beyond that, though, voters don’t care much. They just vote for whoever talks the best talk.

This is a pretty handy thing for politicians.