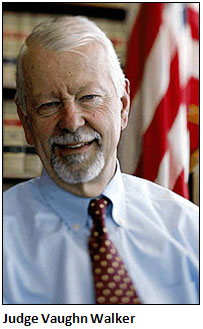 Judge Vaughn Walker has released his long-awaited opinion on the constitutionality of California’s Proposition 8, which bans gay marriage: in a nutshell, it’s not. There’s no rational basis for prohibiting same-sex marriage, he ruled, and therefore it violates both the due process and equal protection clauses of the 14th amendment of the U.S. constitution. The full opinion is here.

But as we all know, his ruling per se doesn’t matter. It will be appealed to the Ninth Circuit Court shortly, and after that it’s sure to be appealed to the Supreme Court. What’s more, a stay is likely in the meantime. So the question is, how compelling is his opinion? Is it likely to sway members of either the circuit or supreme courts?

I am nothing close to a legal expert, so feel free to ignore what follows even more than usual. But I have a feeling the answer is no. The problem is that Walker’s ruling relies very, very heavily on the factual evidence provided by each side’s expert witnesses. But he obviously didn’t think much of the witnesses called by the defense:

[P]roponents in their trial brief promised to “demonstrate that redefining marriage to encompass same-sex relationships” would effect some twenty-three specific harmful consequences. At trial, however, proponents presented only one witness, David Blankenhorn, to address the government interest in marriage. Blankenhorn’s testimony is addressed at length hereafter; suffice it to say that he provided no credible evidence to support any of the claimed adverse effects proponents promised to demonstrate.

….Blankenhorn offered opinions on the definition of marriage, the ideal family structure and potential consequences of state recognition of marriage for same-sex couples. None of Blankenhorn’s opinions is reliable….[T]he court finds that Miller’s opinions on gay and lesbian political power are entitled to little weight and only to the extent they are amply supported by reliable evidence.

So the proponents’ expert witnesses were, to put it bluntly, just a couple of hacks. Conversely, Walker says, he was very impressed with the plaintiff’s expert witnesses. Then, following a list of 80 findings of fact, he ruled that prohibition of same-sex marriage was plainly unconstitutional:

To determine whether a right is fundamental under the Due Process Clause, the court inquires into whether the right is rooted “in our Nation’s history, legal traditions, and practices.”….Never has the state inquired into procreative capacity or intent before issuing a marriage license….Race restrictions on marital partners were once common in most states but are now seen as archaic, shameful or even bizarre….The marital bargain in California (along with other states) traditionally required that a woman’s legal and economic identity be subsumed by her husband’s upon marriage under the doctrine of coverture; this once-unquestioned aspect of marriage now is regarded as antithetical to the notion of marriage as a union of equals….The evidence did not show any historical purpose for excluding same-sex couples from marriage, as states have never required spouses to have an ability or willingness to procreate in order to marry. Rather, the exclusion exists as an artifact of a time when the genders were seen as having distinct roles in society and in marriage. That time has passed.

Italics mine. This strikes me as an Achilles heel in his opinion, since it suggests that if you think genders still have any distinct role in society at all, then there’s a rational basis for prohibiting same-sex marriage. I’m guessing there are at least five Supreme Court judges who think that. But Walker doesn’t: “The court defers to legislative (or in this case, popular) judgment if there is at least a debatable question whether the underlying basis for the classification is rational.” He then goes on to rule not only that the plaintiffs made a better case, but that it’s hardly even a debatable case:

Proposition 8 cannot withstand any level of scrutiny under the Equal Protection Clause, as excluding same-sex couples from marriage is simply not rationally related to a legitimate state interest. [Italics mine.] One example of a legitimate state interest in not issuing marriage licenses to a particular group might be a scarcity of marriage licenses or county officials to issue them. But marriage licenses in California are not a limited commodity, and the existence of 18,000 same-sex married couples in California shows that the state has the resources to allow both same-sex and opposite-sex couples to wed.

This is….a bit glib, no? Obviously no one is suggesting that California lacks the printing capacity to produce more marriage licenses. And then the final paragraph:

Needless to say, I agree with every word of this. It’s an exhilarating and heartening ruling and I hope the Ninth Circuit Court and the Supreme Court uphold it unanimously. But at the appellate level, the expert opinions offered in the case aren’t going to be especially relevant, and that’s almost entirely what Vaughn based his ruling on. What’s more, Vaughn went even further, clearly displaying his contempt both for the defense’s witnesses and for its decision not to bother contesting the facts, and that contempt might come back to bite him. In the end, he essentially ruled that bans on same-sex marriage are nothing more than an “artifact” of history, and I have severe doubts that this is going to withstand scrutiny. At the Supreme Court level, the briefing attorneys won’t be limited in their presentation of the law, and all they have to do is show some rational reason for existing bans. It doesn’t have to be a great reason, and it doesn’t have to be a reason that anyone mentioned at the district level, just one that’s not plainly looney. I’m not sure that Vaughn was persuasive in ruling that no such reason exists.

I hope I’m all wet about this. Obviously district courts rule on facts and appellate courts rule on the law, so maybe I’m making too much of this. But my guess is that none of the expert testimony in this case is going to make a whit of difference at the Supreme Court, and without that it’s not clear the ruling can be sustained. We’ll see.