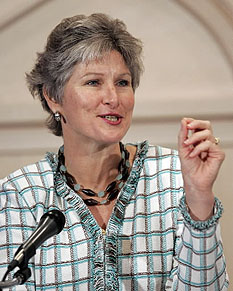 Over the weekend, former Bush aide (and longtime pal) Karen Hughes wrote an op-ed in the Washington Post suggesting that although Imam Feisal Abdul Rauf has the right to build a community center and mosque anywhere he wants, she thinks he would be wise to voluntarily choose a different location that’s farther away from Ground Zero:

I recognize that I am asking the imam and his congregation to show a respect that has not always been accorded to them. But what a powerful example that decision would be. Many people worry that this debate threatens to deepen resentments and divisions in America; by choosing a different course, Rauf could provide a path toward the peaceful relationships that he and his fellow Muslims strive to achieve. And this gesture of goodwill could lead us to a more thoughtful conversation to address some of the ugliness this controversy has engendered.

This all sounds very calm and reasonable. Sometimes discretion is the better part of valor. But I think Hughes has skipped at least a couple of bases here.

First, this isn’t a matter of asking Rauf to take into account a spontaneous wave of pain and raw feelings generated by his project. If it were, Hughes’ proposal would at least be understandable. But the Park51 project produced no reaction when Rauf first announced it. Opinion leaders thought it was fine, ordinary citizens thought it was fine, and planning commissions thought it was fine. But months later a lunatic bigot named Pam Geller managed to get the attention of a few columnists, and then Fox News and Sarah Palin and Newt Gingrich weighed in and suddenly it was a massive affront to dignity and a sign of Muslim triumphalism on hallowed ground. Responding to real emotion is one thing, regardless of whether the emotion is justified. Anybody with a heart at least gives it consideration. But responding to a wholly ginned up controversy that’s driven by ideologues and partisan politics? That’s just capitulation to the mob.

Second, would it be a powerful example? I don’t see how. I wonder what Hughes thinks the reaction of the mosque opponents would be if Rauf took her advice? Would they all calmly praise Rauf for his statesmanlike stance and lead their flocks in demonstrations of support and interfaith harmony? Or would they scream war whoops and declare a historic victory over the infidel hordes at the metaphorical gates of Vienna? Do I even need to ask?

The mosque controversy is no grass roots movement. It’s a cynical political ploy, and giving in to it merely provides strength to the next one that the right decides to gin up. It’s a bad idea. Better to simply stand up for what’s right and ask the cynics to stand down instead.