Carmen Reinhart and Kenneth Rogoff say (approximately) that when a government’s debt level gets above 90% of GDP, that’s a warning sign. Based on a massive database of past financial crises collected in their recent book, This Time is Different, they suggest this is the level at which growth starts to stall and economies go into a tailspin.

The title of the book, of course, is ironic: their whole point is that, in fact, this time isn’t different. We should pay attention to all this economic history. Still, you could pretty reasonably argue that the postwar global economy really is distinct from the gold-standard-based economies of the previous few centuries, so maybe you should confine yourself to looking at just the past 60 years. Reinhart and Rogoff’s latest crack at their argument goes back over a century, and Paul Krugman narrows it down:

Skeptics like me quickly questioned the causal interpretation of the correlation. [The single U.S. data point was due to postwar demobilization.] We pointed out that other episodes of high debt and low growth, like Japan since the late 1990s, were arguably cases in which causation ran from collapsing growth to debt rather than the other way around.

So surely the question is how much of the correlation survives once we restrict ourselves to cases in which the causation is plausibly from debt to poor growth, rather than likely being spurious or reversed. But R-R don’t offer any response to that question. They do give us a list of peacetime high-debt episodes: [List follows]

….If I’m reading this right, then the postwar cases other than Japan — which I’ve argued looks like reverse causation — are Belgium, Ireland, and Italy. Are these cases enough to 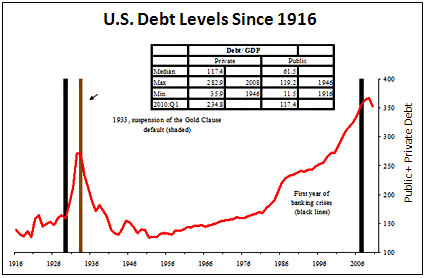 bear the weight now being placed on that supposed 90 percent red line?

This is good reason to look at the data skeptically. The problem is that it also provides us with a strong temptation to ignore data we don’t want to see. But even given the caveats, we now have centuries of data points that R&R say support their thesis, and half a dozen that seem to be highly relevant to our current circumstances: namely that the U.S. is now above the 90% threshold if you use gross debt as a measure, and below it but getting there fast if you count only debt held by the public. Either way, it’s a warning sign.

Overall, I’d say that R&R’s data supports the policy that both Krugman and I endorse: stimulus now to help the economy recover from a financial shock, combined with credible future austerity and tax plans to reduce the deficit. This time might indeed be different, but I wouldn’t bet the ranch on it.