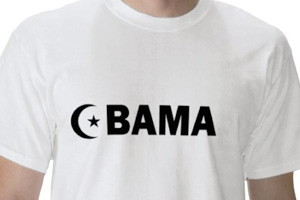 There have been, by my unofficial count, approximately 5,487 stories written about the Pew poll showing that 18% of the country believes that Barack Obama is a Muslim, up from 11% a year ago. But why has this number gone up so much? Because Americans are dumb? Don’t be silly. They aren’t any dumber now than they were in March 2009.

The answer, of course, is obvious to anyone with a pulse, but since we no longer live in a country where obvious answers are good enough, we need a political scientist to provide us with some hard data. John Sides does that today, breaking down the Pew data by party affiliation and level of education. The results among Democrats are boring: belief in Obama’s Muslim-osity is up only slightly, and it’s up about the same among all educational cohorts. What’s more, just as you’d expect, the better educated folks are more likely to have things straight.

Results among Republicans are on the right, and they’re far from boring. Here is Sides: 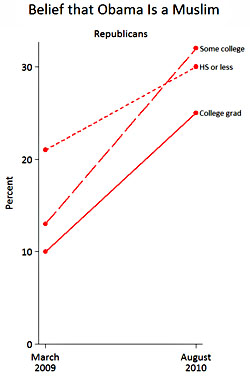 ….Obviously, we cannot draw definitive conclusions from this analysis. It does not prove that some media personalities and political leaders are responsible for the increasing perception that Obama is a Muslim. But it points in that direction.

Well, yes, the data does point in the direction of media personalities feeding the perception that Obama is a Muslim. In fact, it points to it with a gigantic, blinking red neon arrow. Of course the reason more people think Obama is a Muslim is because Fox and Rush and Drudge and all the rest keep insinuating it. And the more educated demographics, who ingest more political news, are therefore the ones most likely to change their views.

Really, it’s remarkable that we all pretend to be idiots on this score. The conservative media promotes a variety of wacky memes on a 24/7 loop, their viewers eventually buy into them and pass them along to their friends, and this eventually shows up in poll results. No other explanation is even marginally credible, but in our current fantasy world we’re all expected to stroke our chins and pretend that the source of these wacky memes is an open question worthy of extended discussion and multiple interpretations. Jesus.