I tend to think that going back and forth with other bloggers on a particular issue has diminishing returns pretty quickly. I’d say that most of the time a single set of posts from each side exhausts the argument, and two posts does it 90% of the time. After that the argument usually just spirals downward along one of several increasingly predetermined paths, none of them good.

So I normally say my piece and then quit. Which I should probably do here. But I guess I’m feeling stupid this morning, because I’m going to push back yet again on the issue of credit card interchange fees. On Tuesday I linked to a Boston Fed 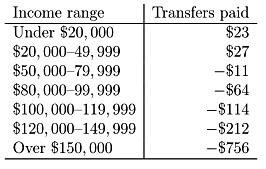 article suggesting that the net result of interchange fees was a transfer of wealth from the poor (who pay higher prices generated by the fees even though they mostly use cash) to the middle class and the rich. I wasn’t happy about this, but Matt Yglesias and Megan McArdle push back:

Matt: Once you keep in mind the fact that the median household income in 2008 was slightly above $52,000 it’s not at all obvious to me that this is any kind of scam. Instead, it appears to be a classic positive sum business interaction. Credit card companies use interchange fees to cut into retailers’ monopoly rents and then rebate a share of the fee to consumers via reward programs, and on net consumers benefit and the median household appears to benefit….Now it’s true that in this particular case my conscience is pricked by the fact that poor consumers end up losing out. At the same time, do we really think it’s feasible to conduct distributive analysis of every new business model and only accept the ones that are beneficial to poor consumers?

Megan: I never understood why the progressive consumer finance types got so worked up about interchange fees, which are essentially a knock-down fight between two very powerful business lobbies, not a cosmic injustice perpetrated against the American consumer….To be sure, the current system benefits the wealthy most. But that is broadly true of many business models; shall we outlaw Costco because the poor cannot afford lavish pantries and large chest freezers in which to store their warehouse-club bounty?

First off: I’m mystified by the “retailers’ monopoly rents” that Matt talks about. I have no idea what this is supposed to mean. So maybe I’m genuinely missing something here.

But barreling ahead regardless, I’m pretty sure the issue is more on the other side: it’s the card networks (Visa and Mastercard control the vast majority of the credit card market) that are effective monopolies. So the question is: are they using their monopoly position to charge interchange fees that are too high? To put it another way: who actually pays these fees, anyway?

I did a bit of desultory research to see if anyone knows the incidence of interchange fees, and the answer appears to be no. There’s been some theoretical work, but not much in the way of empirical studies. This is important, because if the net effect of the fees is merely to reduce merchant profits a bit, or to balance the costs between merchant and purchaser banks, then Megan is right: who cares? Let the giants fight it out on their own. But if merchants pass along most of the fees directly to consumers, then it matters.

However, although there’s no definitive evidence on this score, there are some reasons for thinking that fees are too high and that consumers do end up paying at least part of them. There’s the Boston Fed study, of course. And here’s an ECB report suggesting (unsurprisingly) that in a monopoly environment interchange fees will always be set too high. And there’s this New York Times piece about swipe fees in the debit card market, which makes it pretty clear that Visa’s fees are simply egregious abuses of its monopoly power. And if they’re abusive in the debit card market, they’re probably abusive in the credit card market too. Finally, there’s the fact that current fees are so high that card issuing banks can afford to rebate a big chunk of them in rewards programs, something that flatly makes no sense in a sane world.

Now, even if this is all true, it’s also true that on the list of ways in which the poor are screwed, this doesn’t make the top ten. It probably doesn’t even make the top 100. But I hate the idea of dismissing it anyway. The problem is that this is practically a paradigm example of how all this screwing works throughout the financial industry: most of it is small stuff. It’s a few dollars here and there, and banks have a huge incentive to keep it that way. That way nobody really thinks it’s worthwhile to bother addressing even though those dollars add up to billions if you screw enough poor and vulnerable people at a time. And Wall Street does. That’s why this kind of thing deserves attention even if it’s not, by itself, all that big a deal: because there’s a lot of it, and it basically all benefits the haves at the expense of have-nots. We lose our humanity when this becomes merely a shrug of the shoulders and a “to be sure.”

Beyond that, let’s make it clear what I’m proposing. I don’t want to eliminate interchange fees. Card payment networks cost money to operate and there’s nothing wrong in theory with using interchange fees as a way of offsetting those costs. In fact, I’m not sure I even want to limit interchange fees. What I’m opposed to is their invisibility. All I want to do for now is bring them into the open.

There are two ways this could happen. The first would be to eliminate the merchant charge and have card companies simply add the interchange fee directly onto consumers’ bills. So every month you’d get your Visa bill, and at the bottom there’d be a charge of a few dollars that represents the interchange fee. This way consumers know just how much their cards actually cost them

However, this assumes that consumers are already paying 100% of these fees, and they probably aren’t. It’s probably a mix of consumers, merchants, and banks. So a better, more modest idea is to keep interchange fees intact as a merchant charge but allow merchants to pass that charge along to customers if they want to. Right now, Visa and Mastercard prohibit this, something they can get away with because they’re monopolies and merchants have little choice but to accept their terms. I’d like to do away with this prohibition and let merchants raise the price for credit card purchases if they want to. If they don’t, that’s pretty good evidence that card networks are charging a fair price for the service merchants get from them (increased sales, less handling of cash, etc.). And there’s no harm done. But if they do tack on the charge, it’s pretty good evidence the networks aren’t charging a fair, market-clearing price. I say: let’s find out. Interchange fees are hardly the biggest injustice in the world, but then again, this is hardly the most intrusive remedy in the world either. Everyone ought to be in favor of transparency, and everyone ought to be opposed to allowing monopolies to set abusive terms in their contracts. Sometimes God is in the details, and this is one detail I’d like to expose to a little sunshine.