Need a picture of a pensive and lonely Barack Obama stewing over the BP oil spill? Just create one! Jeremy Peters of the New York Times explains:

There was President Obama on the cover of the June 19 issue of The Economist, standing alone on a Louisiana beach, head down, looking forlornly at the ground.

The problem was, he was not actually alone. The photograph was just edited to make it look that way.

The unaltered image, shot on May 28 by a Reuters photographer, Larry Downing, shows Adm. Thad W. Allen of the Coast Guard and Charlotte Randolph, a local parish president, standing alongside the president. But in the image that appeared on The Economist’s cover, Admiral Allen and Ms. Randolph had been scrubbed out, replaced by the blue water of the Gulf of Mexico.

An Economist editor responds with some examples of obvious image alteration they’ve used in the past, but then falls down trying to explain why they did some pretty nonobvious alteration this time around:

I asked for Ms. Randolph [the woman next to Obama] to be removed because I wanted readers to focus on Mr. Obama, not because I wanted to make him look isolated. That wasn’t the point of the story. “The damage beyond the spill” referred to on the cover, and examined in the cover leader, was the damage not to Mr. Obama, but to business in America.

The Economist has a history of using photos more as illustrations than as objects of straight news, but this still crosses a line that a news magazine shouldn’t cross. Hell, I wouldn’t do something like this on my blog, let alone on the cover of the Economist. But decide for yourself. The full transformation is illustrated below — and yes, I used Photoshop to create it. 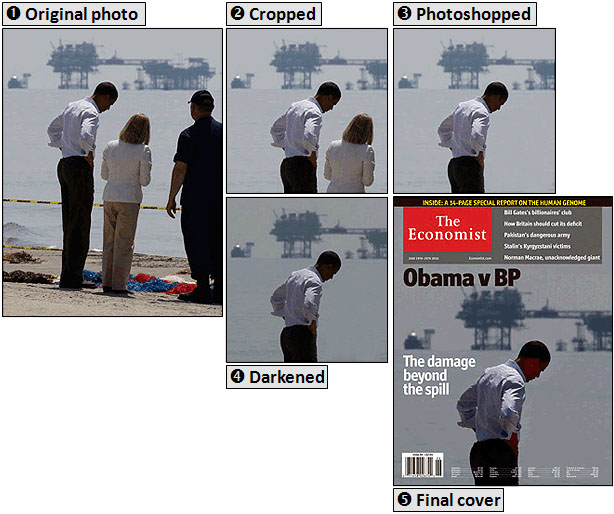