If Bloomberg polls are to be believed, it appears that Americans have decisively rejected President Obama’s moratorium on oil drilling in the gulf:

Most Americans oppose President Barack Obama’s ban on deepwater oil drilling in response to BP Plc’s Gulf of Mexico spill, even as they hold the company primarily responsible for the incident. Almost three-fourths, 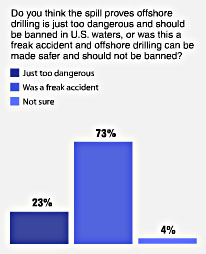 or 73 percent, say a ban is unnecessary, calling the worst oil spill in U.S. history a “freak accident,” according to a Bloomberg National Poll.

This is stunningly bad journalism. Pending a safety review, Obama has put in place a five-month moratorium on deepwater drilling in the outer continental shelf. But the Bloomberg question doesn’t ask about this: it asks if offshore drilling should be flatly “banned in U.S. waters.” These aren’t even remotely the same things, and in no way can you conclude from this question that “most Americans oppose” the moratorium. They might, but an ABC poll that actually asks the question properly1 tells us that only 39% oppose Obama’s moratorium.

The Bloomberg results make for an exciting headline, but that’s about it. Correlation with reality is pretty close to zero.

1Well, more properly, anyway. Even the ABC poll doesn’t mention that only deepwater drilling is affected by the moratorium. Still, better than Bloomberg.