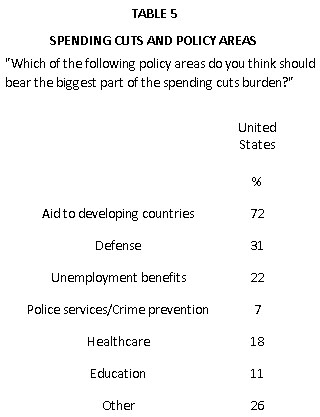 Via Bruce Bartlett, here are the results of a Harris poll that asked people various questions about deficit reduction. Americans, it claims, are strongly in favor of spending cuts instead of tax increases and believe, by a 73% margin, that “public spending cuts are necessary to help long term economic recovery.”

OK then. Spending cuts it is! And just what should we slash? Well, that’s shown in Table 5, to the right, and the answer is…..

Aid to developing countries! Which currently accounts for something south of 1% of the entire federal budget. Aside from that, there was no appetite for cutting anything. Even defense spending, bloated by two unpopular wars, was favored for the chopping block by fewer than a third of respondents. “Healthcare” got only 18%, and since my guess is that this was mostly people who want to cut spending on healthcare for poor people, this means that Medicare cuts are favored by virtually no one. And Harris didn’t even bother to ask about Social Security.

Bottom line: Americans say they want to cut spending, but they pretty plainly don’t want to cut any actual spending. Just fantasy spending. Sort of like being in a rotisserie baseball league.