In the Citizens United case, the Supreme Court ruled that corporations could spend freely on political campaigns but left the door open for Congress to impose disclosure and transparency rules. So that’s what House Democrats set about doing. Unfortunately, the NRA doesn’t really want anyone to know who their funders are, and they threatened to carpet bomb Capitol Hill with postcards if they weren’t exempted from the proposed rules. 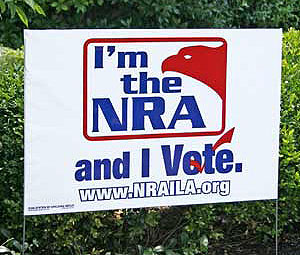 So they were. Now everyone else wants a piece of the action too:

Top Democrats abandoned plans for a Friday vote in the House on the legislation, known as the Disclose Act, after liberal groups and members of the Congressional Black Caucus rose up against the deal with the NRA.

….The anger boiled over Thursday afternoon during meetings between House Speaker Nancy Pelosi (D-Calif.) and members of two crucial voting blocs: the CBC and the conservative Blue Dog Democrats. The Black Caucus objected to the bill’s potential impact on the NAACP and other civil-rights groups, while the Blue Dogs are spooked by opposition from the business lobby ahead of the November elections, according to aides familiar with the meetings.

[Chris] Van Hollen’s office said he remained confident a deal could be reached. He attempted to bridge differences Thursday by expanding the number of potential groups that would be exempted from disclosure requirements, from those with more than 1 million members to those with more than 500,000.

Give it time. We’ll eventually get that number down to groups that have more than 100 members and have been in existence for at least two weeks. And then the Supreme Court will say they were just kidding the first time around, and Congress doesn’t actually have the power to mandate disclosure on private groups anyway. Ain’t politics grand?