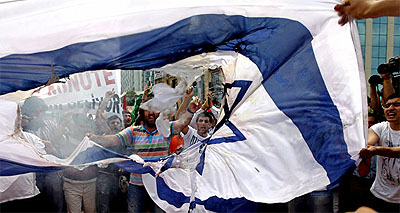 Here’s a couple of paragraphs from a New York Times story about the Turkish reaction to Israel’s raid yesterday on the flotilla attempting to run its blockade on Gaza:

A senior Israeli official said that Israel had tried for two weeks to persuade Turkey to stop the flotilla’s voyage, but that Turkey said it was a nongovernmental action that it was powerless to stop. Israel’s ambassador in Turkey, Gabi Levy, did not return a call for comment.

One wild card is Mr. Erdogan, a strong-willed former Islamist who is the driving force behind Turkey’s criticism of Israel and its policy toward the Palestinians. He has pushed a foreign policy that has taken a more active role in the region, serving as mediator between Israel and Syria. But the United States has not appreciated all his efforts, like his recent attempt with Brazil to broker a nuclear deal with Iran.

….Asli Aydintasbas, a columnist at the Turkish daily Milliyet, argues that the episode was a striking failure in diplomacy, for both the United States and Turkey. The new foreign policy pursued by Turkey’s government has given it a confidence that sometimes results in overreaching. For example, Turkey believed it could change Israeli policies toward Gaza.

More here. I haven’t seen very much that tries to dive deeper into this part of the story, but at first glance it almost seems as if Turkey was deliberately trying to provoke an incident that would justify cutting off relations with Israel. After all, the Israeli commando raid may have turned out more deadly than anyone expected, but something like it was always probable and the Turkish government surely knew it. Alternatively, maybe Aydintasbas is right: it was just a massive miscalculation by Erdogan, who quixotically thought that Israel would soften the blockade if it knew that Turkey stood behind the blockade runners. Or maybe Turkey really was powerless to do anything about the flotilla.

I’m sure there are a thousand layers upon layers that could be said about this, and I can’t even comment sensibly on the top one. But if anyone can point to some really knowledgable commentary on this particular aspect of yesterday’s incident, let us know in comments.