Today probably marks the official death of climate legislation in the United States. Lindsey Graham, the only Republican even nominally favorable toward any kind of carbon pricing plan, has announced that he can’t support the Kerry-Lieberman bill because it doesn’t allow enough offshore drilling (!), and without Graham there’s pretty much zero chance of getting any further Republican support. 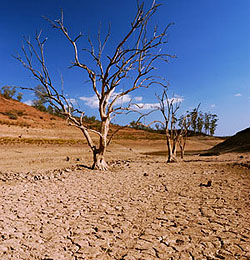 So the odds of passing climate legislation, already slim, have now dropped to zero. The only option left is a pure energy bill, something that accomplishes very little, and accomplishes that little solely by offering up subsidies to every special interest you can imagine.

By coincidence, Stanford researcher Jon Krosnick has an op-ed in the New York Times today that suggests this is exactly what the American public wants:

When respondents were asked if they thought that the earth’s temperature probably had been heating up over the last 100 years, 74 percent answered affirmatively. And 75 percent of respondents said that human behavior was substantially responsible for any warming that has occurred.

….Fully 86 percent of our respondents said they wanted the federal government to limit the amount of air pollution that businesses emit, and 76 percent favored government limiting business’s emissions of greenhouse gases in particular. Not a majority of 55 or 60 percent — but 76 percent.

Large majorities opposed taxes on electricity (78 percent) and gasoline (72 percent) to reduce consumption. But 84 percent favored the federal government offering tax breaks to encourage utilities to make more electricity from water, wind and solar power. And huge majorities favored government requiring, or offering tax breaks to encourage, each of the following: manufacturing cars that use less gasoline (81 percent); manufacturing appliances that use less electricity (80 percent); and building homes and office buildings that require less energy to heat and cool (80 percent).

So there you have it: the American public believes in global warming and wants the government to do something about it. However, the American public doesn’t want to do anything — carbon taxes or cap-and-trade — that might actually work. But they do want to open the federal goody bag and dole out subsidies and tax breaks to everyone under the sun, presumably because these all sound like pleasant things to do and they’re under the impression that they’re all “free.” Whether they work or not isn’t really on their radar.

And it looks like that’s what Congress is going to deliver. We are, in this case, getting exactly the government we deserve. A government of children.1

1Yes, I’m feeling bitter about this at the moment. Anyone have a problem with that?