I argued yesterday that it was silly to insist on a narrative that credits voter rage for the passage of California’s Prop 14, which changes the way primaries are held here. And I stick to that. After all, two years ago California voters approved Proposition 11, which also changed our electoral structure fundamentally by taking redistricting power away from the legislature. Like Prop 14, it passed narrowly. Like Prop 14, it was a follow-on to a previous similar initiative that had failed. Like Prop 14, it had the endorsement of most of the state’s big newspapers. And guess what? No one suggested it passed because of voter anger. So why insist that this has to be the reason for Prop 14’s passage?

If you’re going to make that claim you need some actual evidence. So for that, let’s turn instead to Proposition 16, a measure sponsored by PG&E that was billed as a “taxpayer’s right to vote” but, in reality, was a cynical play to use the ballot box to prevent its competitors from 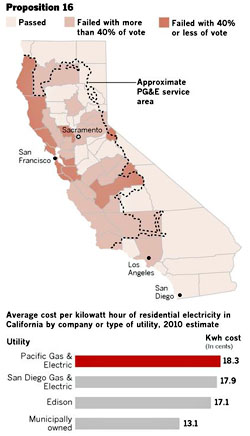 expanding. PG&E spent nearly $50 million on Prop 16 and its opponents spent nearly nothing, but it went down anyway. Why? How about “ratepayer rage”?

Fed up with big bills, distrustful of new meters that show higher usage and chagrined by power shutoffs when payments are late, PG&E’s customers sent a vote of no-confidence to the giant utility this week when they rejected the utility-sponsored Proposition 16.

Voters in counties served by Pacific Gas & Electric Co., which spearheaded the measure to deter government-run power providers, rejected the measure by large margins while counties less familiar with the state’s largest electric utility supported it.

….Chris Davis, 45, who opposed Proposition 16, said she was still livid about the rolling blackouts a few years back. “PG&E is a force for evil,” the San Francisco graduate student said. “I bundle up. I wear three sweaters, two hats and do jumping jacks before I will turn on the heat. I hate them. They are awful. And I’m a Buddhist. I don’t usually talk like this.”

The map above tells the tale. If you don’t actually have to endure PG&E as your electricity supplier, their anti-tax message sounded pretty good. But if you do have to do business with them, you were in no mood to give them any more clout than they already have.